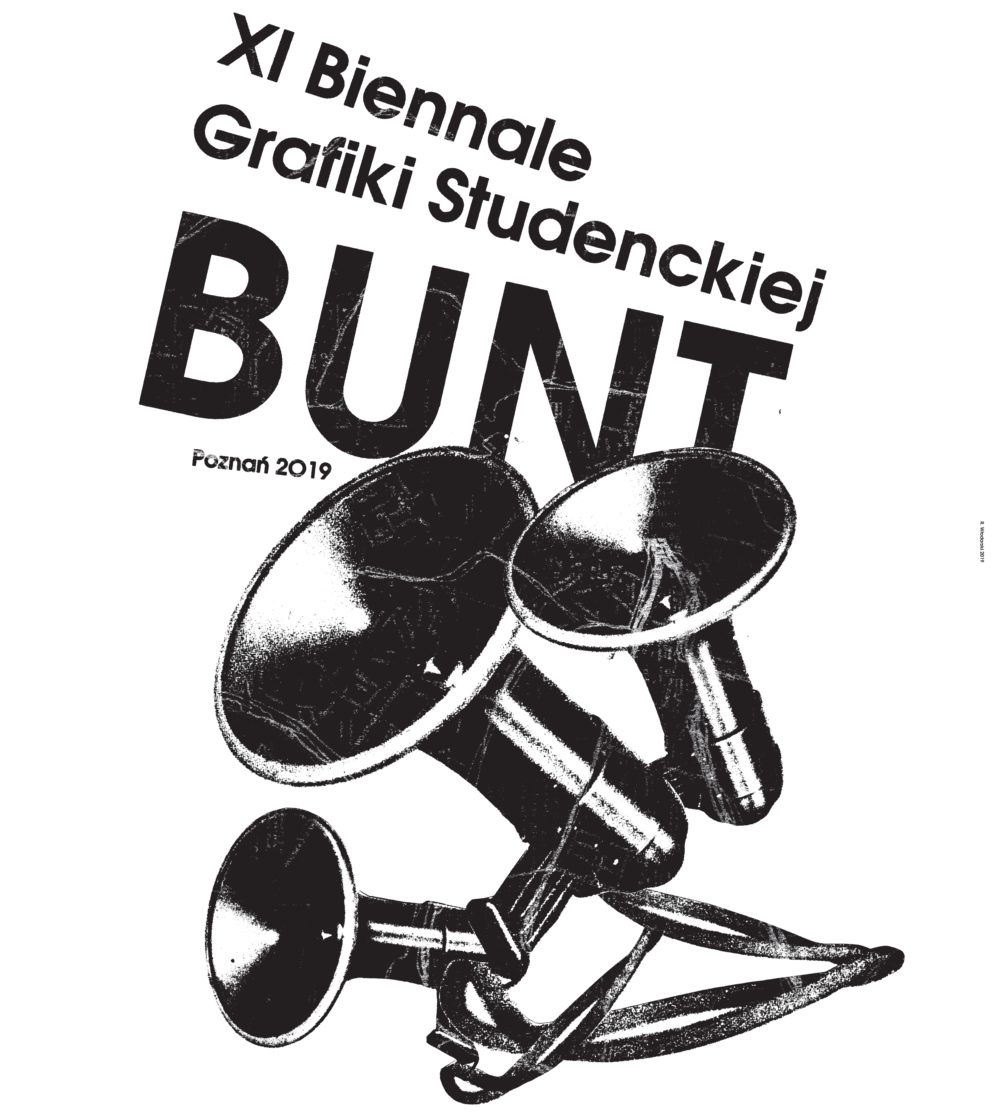 The 11th Student Graphics Biennale in Poznań coincided with the hundredth anniversary of the Poznań group Bunt, founded in 1918. The group included artists who created their works primarily using graphic techniques and linocut in particular. Bunt artists undertook socially engaged topics, being part of the discussion about the possibility of creating a new, better reality and critically referring to that period. They undertook utilitarian issues that went beyond local affairs. They represented the avant-garde art movement, which was based on the desire to ‘rebuild the world’.

The slogan of the 11th Student Graphics Biennale was ‘Bunt’. It highlighted the value of creative activities related to the attitude of contestation, i.e. questioning accepted views and principles. However, it did not impose a way or a direction of action.

Young graphic designers treated their works with with a lack of constraint, placing them outside the stereotypes of thinking and thus offering new ways of seeing the world. They approached the topic in an unobvious way, representing a high level of graphic skills. For the most part, they did not use the poster way of presenting a message, but applied a less demonstrative language of metaphor.

Although Zuzanna Kamińska’s work is made in traditional graphic metal technology, it goes beyond the standards of thinking about it and transforms the space. The project is a graphic installation showing a network of power lines. This multi-element graphic work activates that which is between two dimensions of graphics. The author draws attention to the message as an element building the work, emphasises the value of emerging world-systems[1], enabling actions that affect the cultures, economies and politics of distant places (e.g. the Central African agricultural economy was directly conditioned by subsidies for farmers in the United States). The work does not focus on the materiality of its components, but on the possibilities of combining them. The goal leads to the creation of connections and relations without their detailed analysis. It is therefore necessary to know which elements should be omitted and which should be emphasised so as not to fall into the trap of half-truths or conspiracy theories.

The cycle of works by Kajetan Karczewski printed on a painting loom presents fragments/remains/skeletons of a primitive boat. The works can be interpreted in the context of images distributed in contemporary media, which currently draw attention to the problem of migrants seeking a ‘better’ world. The considerations refer to the historical buckle marked by the French Revolution, using the slogan ‘My Nation’, and the tragic events of the twentieth century, displaying ‘ties of blood and land’, or the discussion about national belonging, which is at the same level as the economy and democracy.

The Grand Prix was awarded to Olga Mularczyk for a series of works that contest contemporary culture, including changes caused by technological development enabling the acquisition of information and constantly generating new stimuli. The works have been created meticulously, with great precision and a contemplative approach in opposition to simple and quick solutions. The author thoroughly analyses the constellations of lines and perversely manages to stop the viewer for a long moment of concentration, which proves to be a difficult task in the culture of excess – multiphrenia.

The digital graphic work by Anna Sobczyk was distinguished from a large number of submitted works. The work refers to the situation of Polish artists who, left without the state’s aid, often function on the egde of survival or give up their creative activities. The form of the graphics resembles a white-red flag. It presents silhouettes of people merging with the red colour and the inscription ‘pay rise for artists’ breaking through the red. The slogan is ambiguous because it is not known what criterion should be used to grant financial assistance to artists. It may be necessary to take account of the criterion of work experience or the number of works completed. Perhaps, it is necessary to increase the obligatory salary for artists, which should be paid by art institutions for the implementation of authors’ works. The case of artists who operate outside the institutional circulation should also be considered. Anna Sobczyk’s work also draws attention to the phenomena of slacktivism, which is characteristic of the rebellious attitude, but only within the digital medium.

It is also worth taking a look at the work by Natalia Paczyńska. It is a spatial object – a white and red head of a deer with printed motifs/patterns of weapons. The graphic object becomes a trophy and is an interesting commentary on the myths of contemporary national politics.

Following the considerations regarding the values ​primarily related to skills, one cannot overlook the problem of aesthetics, which focuses the artist’s attention, as Mikhail Bakhtin points out, exclusively on issues related to matter/material. This kind of behaviour is associated with ‘formal play’ focused on pleasure. ‘The form in art organises the material so that it becomes a stimulus of pleasant impressions and states of the psychophysical body. … By isolating art from culture and also individual arts, by seeing a work not in its artistic life, but as a thing, as a structured material, material aesthetics can at best establish a chronological table of changes in technical tricks used in a particular field of art; an isolated technique cannot have a history at all.’[2]

The works presented at the post-competition exhibition use the potential of technology and skills to present ideas related to human activity in the world. They reveal the power of graphic activities aimed at reproduction, which are a good topic for discussion about the present day and help develop an engaged attitude that stimulates reflection, which causes the expansion of graphic boundaries and influences the formation of new meanings.