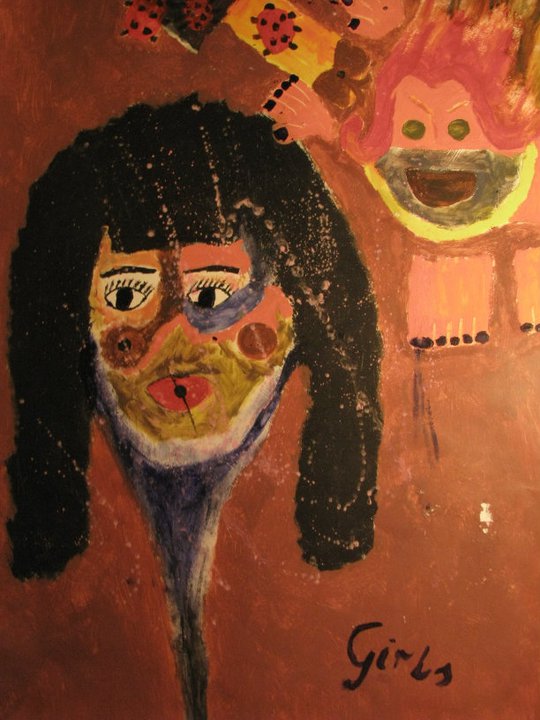 Temporary Portrait Studio at Sandra’s is Anna Anus’s action on the premises of Thistime show. Inspired by Witkacy's practice and the well-known phenomenon of drawing caricatures in tourist destinations, the artist creates images of persons who engage in intimate conversations with her. The artist will be available on the gallery premises every Thursday starting from July 30 to August 20 during the gallery's regular business hours.

When I was 16 years old, I came across a rather inconspicuous, thin and poorly published album of Witkacy's paintings. It was then that I found out that the Grand Master did not shy away from alcohol, drugs and strong tea; in the corners of his paintings he would add the name of the substances used when creating. In Witkacy's work, my attention was mostly attracted by his business called "Firma Portretowa S.I. Witkiewicza" [S.I. Witkiewicz Portrait Company]. I thought then that I could easily run such a company and my cheeks shone with enthusiasm. However, there was one fundamental problem: unlike Witkacy, I was completely unable to draw.

Almost 15 years later I was admitted as an art studies and during my entrance exam I showed the distinguished committee the big and small portraits I had been doing for years, pretending I could draw. I cannot draw, but it doesn't bother me anymore. I don't know if the committee liked my pictures, but they admitted me as the last candidate. While studying art, I noticed that hardly anyone nowadays would be interested in a portrait inspired by Witkacy's Company. They are ugly and have garish colours and are totally at odds with reality, but they bring out what is deepest in the human being and what they would like to be hidden. I see it because I am extremely empathetic and nothing can be hidden from my painting movement of the eye and the hand.

At Sandra's I make my artistic dreams come true and for the first time I do things I haven't done before because I was afraid that something would go wrong. Sandra's is a friendly space and using it I want to invite humans and non-humans to psychoanalytical portrait meetings within the framework of the Temporary Portrait Studio at Sandra’s. I'm warning you that I'm not responsible for what will appear in each portrait. My right hand will be the executor of what will be seen by the third eye, from which nothing can remain hidden. These will not be portraits we know from Kazimierz Dolny, where street painters focus on rendering the sitter's actual, real appearance. Here, everything will be irreal.