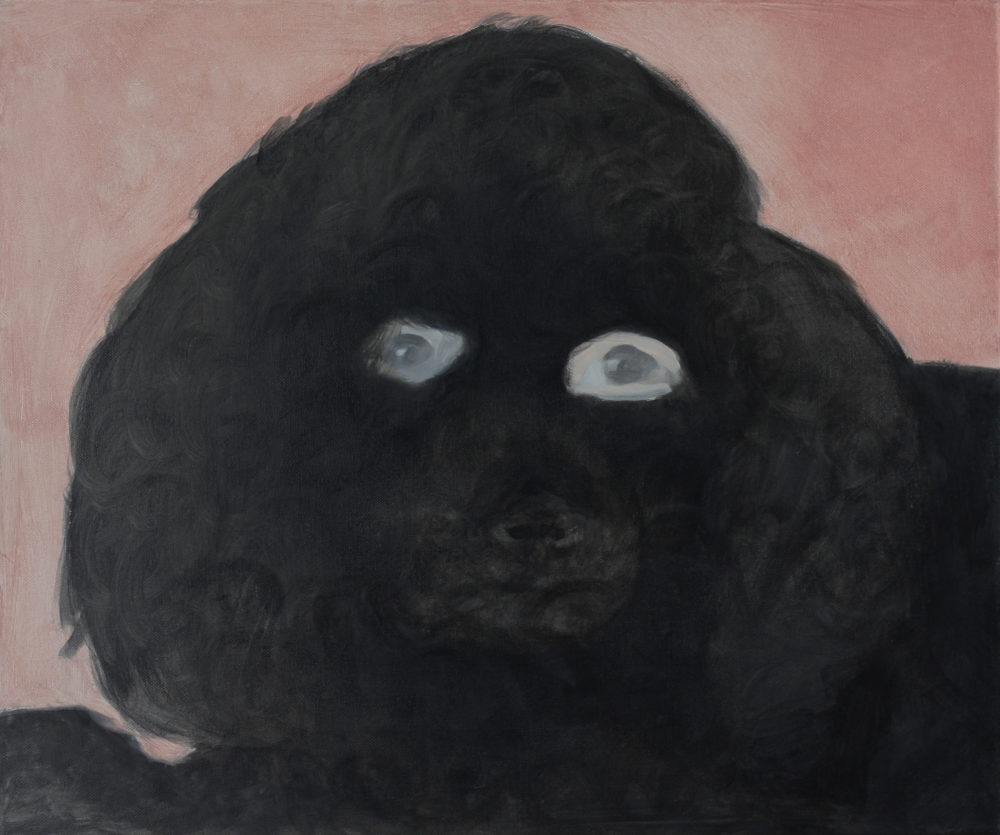 “The cause of the fear was ineffable; he was unable to find words for it.”

I came upon Monika Chlebek’s painting quite by chance. It was a kind of impulse you cannot disregard. A few months earlier I had been reading Olga Tokarczuk’s Bizarre Stories and a residue of this reading was still hovering in my thoughts. My imagination continued to set in order the accumulated visions that found their way from stories to dreams … and all of the sudden, as if still borne on the wave of my fascination with Tokarczuk’s prose and in line with the subconsciously still desired logic of suspense, I saw bizarre, Unsettling and Unclear images. They beckoned me to the shadow zone, inviting to enter a space overridden with question marks, a semi-dark brimming with unknowns.

The subdued hues, fragments of figures, tenuously implied situations … Disquiet and an uncanny sense of danger, both underpinned by gallows humour. Beginnings of stories that are suddenly cut off, leaving one awed and insatiable. These images cannot be comprehended yet can be strongly felt. The fascinating texts by Olga Tokarczuk and the unique works by Monika Chlebek contain a mystery which is the cornerstone of the story or at least implies it. This mystery is like a live being from an alternative reality, some seditious fairy-tale gnome that tests the recipients intrepidness and potency of imagination … You can almost hear the deafening giggle … I cannot help thinking that for both authors the voice that dictates successive lines and the gesture that guides the brush across the canvas are – at least partly – a mystery.

Asked about the methods of work, Monika Chlebek stresses the role of intuition, although she realises that she runs the risk of being accused of stereotypically acting in opposition to intellect. However, it is intuition that is her compass. When she collects enough energy and the attendant themes, motifs and concepts, she begins to paint. The successive painting is in a way a consequence of the first one; it arises from it, although it does not in any way explain or sum it up. The artist is active until the accumulated energy has ebbed and the topics she addresses have ceased to attract her attention and have lost their potency and freshness. In point of fact, the creation of paintings begins much earlier, before she opens a paint tube or grabs a paintbrush. Paintings are created when she pulls canvas on stretchers, reads books, observes, thinks, and performs everyday activities. As she herself confesses, she spends a lot of time thinking about and zooming in on themes, and although the results of her work are not yet visible at that time, everything that happens at that time is later on reflected in her painting. The artist consciously builds up the tension necessary for the painting process. When the accumulated energy allows it, she carefully rummages through a collection of ideas so that the final choices are not accidental.

Monika Chlebek keeps highlighting that what she likes in art, including her own, is the lack of precise wording. She is after understatements; implies but does not continue, abandons the viewer with an unclear premonition, surprised, with all the justified though “ineffable” anxiety. This is enough for her, because she does not want to tell stories that begin, unfold and end. Her stories appear in the form of scattered shards of an unknown whole. And this is a fully purposeful action of the artist, who deliberately leaves gaps in the visions presented and does not want to convey to the viewer specific thoughts or refer to known truths. That is why she considers talking about her own painting to be disproportionate to the paintings, necessarily neglecting them and not reflecting their essence. The emotional load of her works is truly enormous. Monika Chlebek is convinced that she speaks more through her paintings than through her words. In view of this legitimate statement, the curator had better cease using words, too.