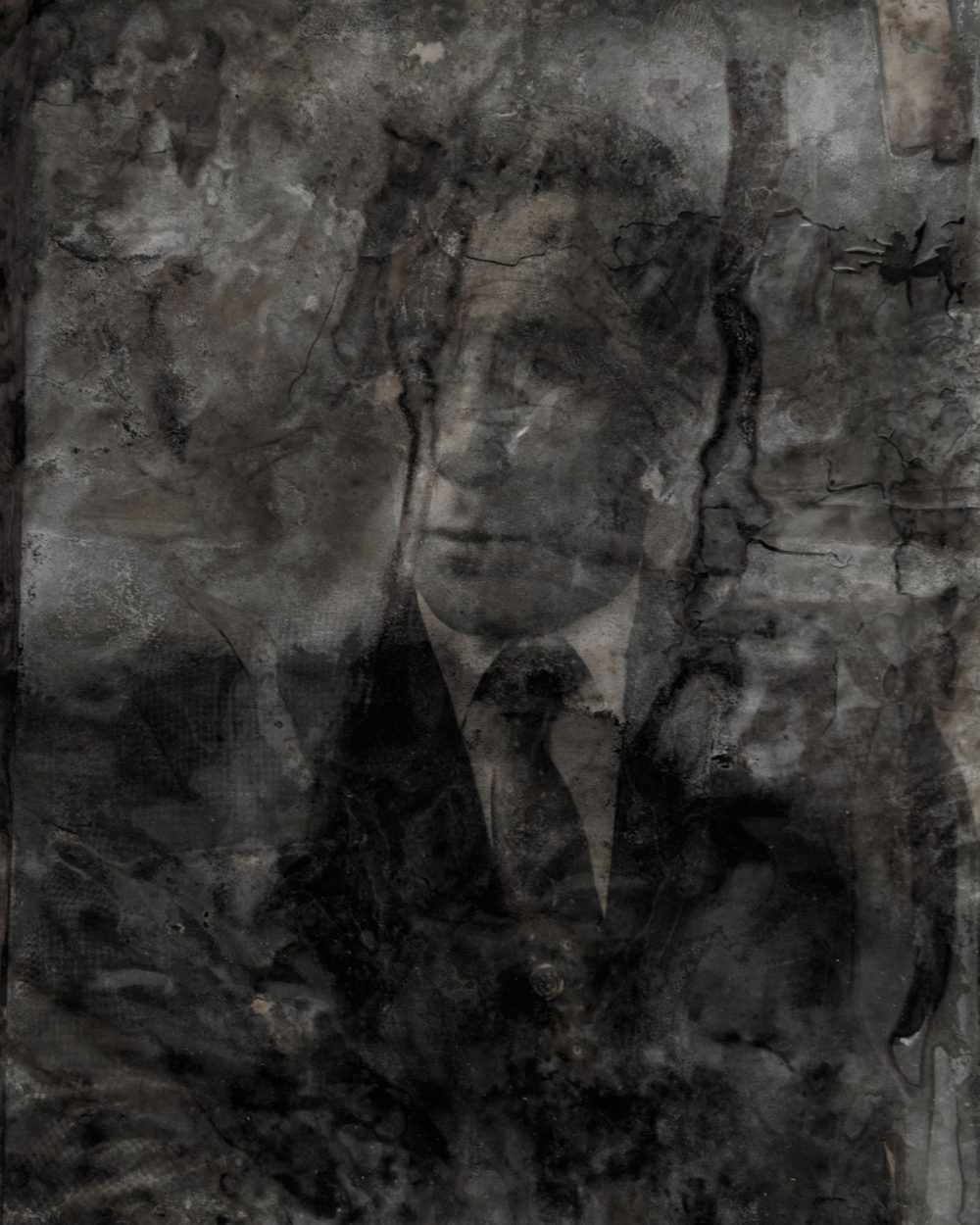 Both works presented at the exhibition react to the tsunami, which hit Japan on 11th March 2011. It obliterated Onagawa, a family city of Mayumi Suzuki. The cataclysm took the lives of the artist’s parents. The family photo studio, which had been in the family hands since 1930, ceased to exist. It belonged first to Suzuki’s grandfather and later it passed into the hands of her father. 827 people died. From 10000 inhabitants of Onagawa, many moved out after tsunami and only half of that number stays there today.

The Restoration Will by Mayumi Suzuki attempts to combine a mosaic narration of preserved family archive, a photo portfolio of her father, material fragments of destroyed pictures found in the ruins of their home with contemporary photos. What we witness is a distinguishably personal attempt of sorting out a private history. The artist investigates those few visual traces left in the debris. Suzuki examines randomly preserved photos as they represent the only material basis for rooting a memory. The artist analyses them. She delves into the different strands intertwined with the physical signs of destruction.

Memory, in this situation, seems to be depended on chaotic fragments of reality, which survived the havoc. It is unstable, therefore there is, even more, need to examine in detail the quality of the base material. The destroyed emulsion of family photos forms a shape of maps showing peninsulas. Randomly preserved scenes from the album acquire significance as they are the only images testifying the past events. Destroyed by water images of shipyard workers, done by her father, become a document of the relationships with Onagawa’s people.

Researching the traces left after the catastrophe is even more striking as a result of a methodical and consistent approach in analysis. Suzuki highlights the details. If she decides to perform some interference, it is a thoughtful action, logical tactics, which marks visual strands observed in the ruins. This exploration is performed in the simplest possible ways. It is based on what was left. It preserves the destroyed Onagawa in images. Perhaps it is the only possible method to record the strayed relatives in those areas.

‘One day, I tried to take a landscape photo with my father’s muddy lens. The image

came out dark and blurry, like a view of the deceased. Through taking it, I felt I could

connect this world with that world. I felt like I could have a conversation with my

parents, though in fact that is impossible.

The family snapshots I found were washed white, the images disappearing. The

portraits taken by my father were stained, discolored. These scars are similar to the

damage seen in my town, similar to my memories which I am slowly losing’.

Mayumi Suzuki, an artist’s statement for The Restoration Will

The Restoration Will is a work, which organises memory, therefore its original form of a hand-made book seems to be the most obvious medium. It transposes a mess of a folder, in which we would keep family memorabilia, into the world of a photo publication – by doing so, it highlights the importance of aesthetic details, fragments of events, singular images. Nothing is left beside them. Nothing, except for the images composing the meaning. For that reason, their context calls for an examination in the smallest possible detail.

The Place to Belong is yet another step in the same process. This time, however, the topic is viewed from a greater distance. It concerns a larger area. Why do people return to a city, which is cyclically destroyed by a tsunami? How do they rebuild families? How and what elements construct the memory about a place marked by an interrupted history; about a place which has to be resurrected from ruins once and again? The Place to Belong is an open work, which uses vast resources. It is based on private archives of Onagawa residents. The artist researches them methodically and she strongly validates even the most subtle intervention, which she undertakes.

We present some working fragments of the set, which make us realise the stages of analysing this vast visual material. Mayumi Suzuki decided upon showing for the first time her series as an announcement of her new book. But it is also a commentary about the process of building a narration in a form of a photographic publication. Similarly to The Restoration Will, it is a box-like story composed of family stories. We watch it as it unfolds further layers. It reconstructs private identification. It methodically juxtaposes personal fragments of scattered Onagawa people’s memory. It comments on what a home and family is while excavating further layers of Onagawa rubble and memory of those, who are responsible now for the new chapter of the city’s history.

Upon exhibiting The Place to Belong, we open a comment on the methods of forming this multi-strand narration. The exhibition is complemented by a limited publication, which was created during the residency of Mayumi Suzuki in PIX.HOUSE Gallery in November this year. Honza Zamojski was responsible for the project and preparation of the newsprint.

The Restoration Will / The Place to Belong