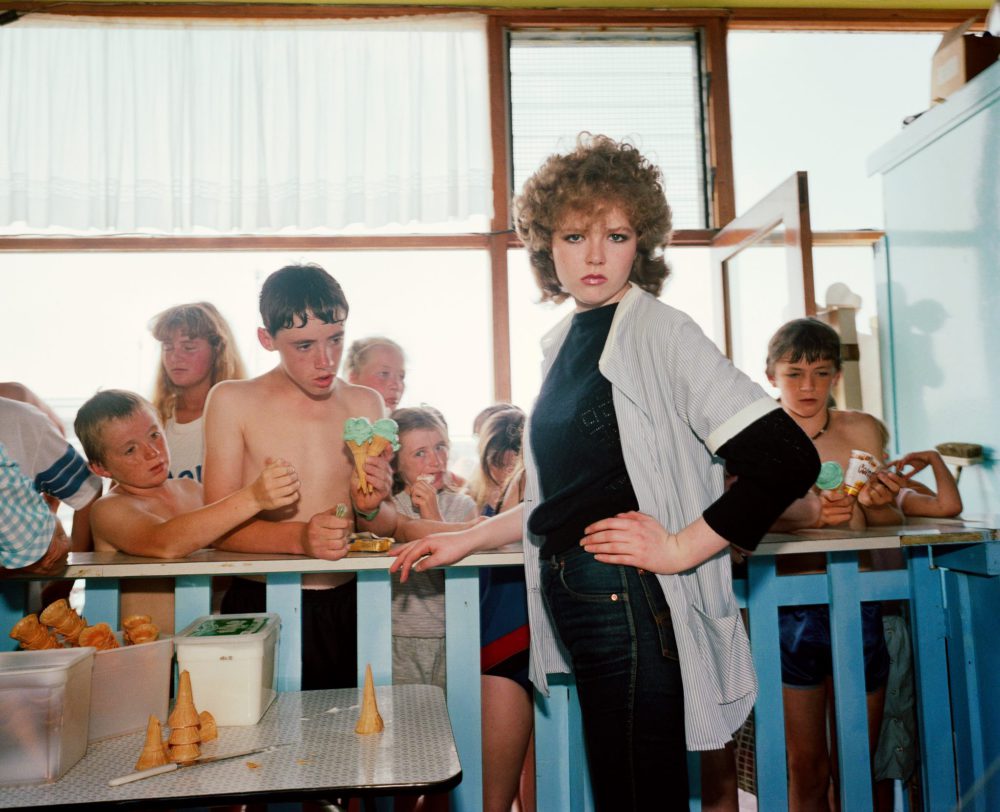 For a tourist expecting the sight of pyramids, the Acropolis or a lonely beach with palms and the blue ocean, vending stalls strewn with kitschy souvenirs, the crowds and conmen are but an obstacle to hurdle. Any holiday-maker expects images they are trained to look for and comprehend by travel agencies brochures. In the world of tourists as presented by Martin Parr (Small World), the reality which does not fit the pre-established patterns eludes perception. The tourist seeks reproductions of advertisements, and Parr ruthlessly unmasks this rupture between the expectations of what the world is supposed to look like, so strong that we are inclined to believe in them, and the complex system of feeding tourists to precisely such an illusion. Parr moves in the opposite direction than the expected tourist destinations. He treats tourism as an autonomous, social system that calls for a description by means of an adequate language. He portrays its elements and analyses its components. When the author focused not so much on the exotic attractions but on the explorers, this bore fruit with iconic images of boredom, frustration, ignorance, and thoughtless rush, in order to experience the pre-designed experience. A woman trudging through groups of Gambian children who try to sell her souvenirs is perfectly trained to close her eyes to what is not worth seeing, what does not fit the model of the attractions she expects, and what should on no account be part and parcel of her immediate experience.

Illusions are prepared images of reality furnished by the tourist industry which we try to reproduce with our own experience when we go on holiday. Parr calls them propaganda. He constructs his narrative about tourism in such a way that the world stripped of the falseness of propaganda might become the protagonist of the photograph. This is actually the real world – the one observed, different from what we “should” think of it and described in an independent language. Only within this real world do we find such absurd events as the propping of the Pisa leaning tower by a crowd of tourists posing for a picture. It is this real world that calls for its own chronicle, giving an account of its structure, which Parr has kept for over three decades.

One could disregard the scenes with a smile and boost one’s own self-esteem at the expense of the thoughtless crowds depicted in Parr’s photographs, were it not for the fact that the pattern of analysing behaviour where we reproduce illusions ourselves, vainly trying to adjust reality to what we imagine it should look like, is more universal. Parr applies it in other situations, too. Fascinated with the culture of going to a beach in his native UK, he looks into this microcosm, participates in it and scrutinises from up close. Thus, the New Brighton beach becomes a crooked commentary on a dream about the Riviera, realised at all costs in the summer, despite the caricature contrast of the surrounding landscapes. In The Cost of Living series, a portrait of the middle class at the close of the Margaret Thatcher era, he is equally uncompromising in laying bare Britons’ aspirations. Today the pictures are absolutely canonical. Both in New Brighton and in the homes of the British middle class, Parr was interested in the fissures, discrepancies between the real world and how we would like to see it. Today the artist’s commentary is seen as classical.

The case of Rimaldas Vikšraitis is more difficult. Tomas Pabedinskas observed in an introduction to The Real World catalogue that Vikšraitis’ grotesque depiction of the world of the drunken Lithuanian villages does not fit the oft-travelled roads of photo narratives. Vikšraitis is no classic, who uses a psychological portrait. What he does is hardly a socially engaged documentary about feasts and revelry, depicting the protagonists with indulgent concern. He is far from aesthetic, romantic images of the countryside, characteristic of classical Lithuanian photography. Neither can we simply equate the scenes that Vikšraitis plays out with the protagonists of his pictures with the self-reflexive method of post-conceptual photography, which produces sterile effects (Tomas Pabedinskas, The Real World, published by Kaunas Photography Gallery). Vikšraitis builds a black-and-white picture of a drunken world of the last inhabitants of the Lithuanian countryside, arranging comic scenes with nude women and pig’s ears, at the same time watching closely this decadent and completely hopeless plight of his milieu. He does it with humour, conscious of his style and with an outstandingly coherent visual strategy. He does not patch up reality but only exaggerates it through interaction. His language, once we have got used to it, becomes pretty natural. It tells a story of a disillusioned life and is neither didactic nor derogatory. His photographs, sometimes very graphic, other times scary, most often funny and hopeless just like a ribald joke of a drunkard, strike one with their authenticity. Vikšraitis takes part in this world, not through drinking, however, but through arranging scenes, people and himself to act out situations for the sake of photographic recording in the real world of drunken Lithuanians.

Once the viewer comes to believe that the story is encapsulated in a smart cliché and is under the impression that he knows what the real world of a small group of people and their shared problem is, the author himself stands before the lens and, in the book Homo Vikšraitis published in June this year, makes comments on humanity. He poses against the backdrop of symbolic, caricature landscapes, acts out genre scenes, shows his private parts, and unmasks idyllic imagery. Perhaps he mocks it all?

When I have an idea but have no model, I use myself. There is no difference [whether it is me or other people who are in front of the camera] and this is not always my choice; when an idea appears and there is no chance for anybody else’s participation, I am forced to make use of myself. That’s all there is to it. I became a model for my own photographs not because life or the world are beautiful.

(Rimaldas Vikšraitis in an interview held in connection with the exhibition, Nida, 5.09.2017)

Adam Mazur wrote in the introduction to this publication as follows:

Vikšraitis is an oddball that no one can understand, a perennial outsider, and a rebellious eccentric. It is easier to exclude and marginalise, than to understand him. It is more convenient to adopt a patronising approach towards him than to adopt the author’s perspective. It is again more convenient to grant him an award for his entire oeuvre and to have one’s mouth full of clichés about dignity than to closely analyse his successive photographs and series. Vikšraitis’ politically incorrect and visually disturbing photographs are a moment of madness in the rather coherent and elegant narrative told by photography historians, theoreticians and critics (…) A Dada performance transforms into a pantomime, only to stoop to the level of a ribald joke. The overt genital and anal fixation, typical of five-year-olds, embarrasses the sophisticated connoisseur. How shall we write about it? How shall we speak about it? Does it not poke fun at our region and prove its cultural inferiority with respect to the well-behaved West?

Here, just like in the Grimaces of Weary Village, Vikšraitis paves the way to reality for us. This reality is demythologised, ridiculed, with no safe and funny ways of representation, one which the established models of imagery are completely inadequate. This reality is as bare as he himself, in the most literal sense.

The irony applied by Martin Parr and Rimaldas Vikšraitis constructs their narratives prudish resistance to portraying representatives of the human species in a way that does not give us credit. It moreover begs the question of the ethical aspect of the documentary photographer’s work, namely how far he can go to make use of real people to construct his subjective statements. Is his uncompromising approach to his protagonists justified? Does the subject matter of the chronicles, i.e. a reality that is hard to notice, let alone to approve of, since both Parr’s and Vikšraitis’ narratives unmask our nice, civil and false images of the world around us, justify the grotesque with which they place real human beings in their stories?

The credibility of both photographers is due to the relation they enter into with the real world. Both very self-consciously position their own engagement in the realities depicted. We believe in these pictures and deem the attendant commentary justified. Both propose honest studies, ones requiring a thorough analysis, and both construct coherent, if so formally divergent visual narratives related to these studies. They communicate what values move the world go around, what vaulting ambitions we harbour, contrary to those which, driven by vanity and desire to boost our own social status, we would like to stick by. The artists’ ironic approach facilitates the swallowing of not too optimistic diagnoses they formulate, and hyperbole becomes a credible, personal safeguard against the illusions they oppose.

Analysis of the true world takes place on the basis of clear procedures and should be called methodical. We therefore consider The Real World as the central event of the photography books festival, during which we reflect on the methods of long-term documentary projects. The starting point is an-depth and striking depiction of Parr’s and Vikšraitis’ true worlds. The successive, parallel strategies will be presented during meetings with Polish photographers, curators and designers, who make use of the photo book as an autonomous medium of visual statements. Invited guests will analyse the methods applied by photography during long-term series culminating with publications. These strategies will be so much distant from focusing on the incidental and from seeking illustrations for pre-established hypothesis. They will build generalisations only at the stage of recurrent, self-critical and conscious encounters between the photographers and the realities they try to talk about. We will focus on the methods of describing the world by documentary photographers put to a hard test, when the medium they use to present the result of their work is the demanding book form.

The joint exhibition of both photographers is partly an outcome of their earlier relations; in 2009 Martin Parr showed photographs by Vikšraitis to the public in Arles. The Lithuanian’s participation in the festival culminated with his acceptance of the prestigious Discovery Award and ushered in a series of exhibitions presenting Grimaces of Weary Village to an international audience.

The author of the curatorial concept and selection of the photographs for The Real World is Gintaras Česonis, who debuted as a curator at the Kaunas Photography Gallery in Lithuania. The Real World has so far been on show in Kaunas, Vienna, Minsk, and Tbilisi. The Poznań edition is the last public show in this format.