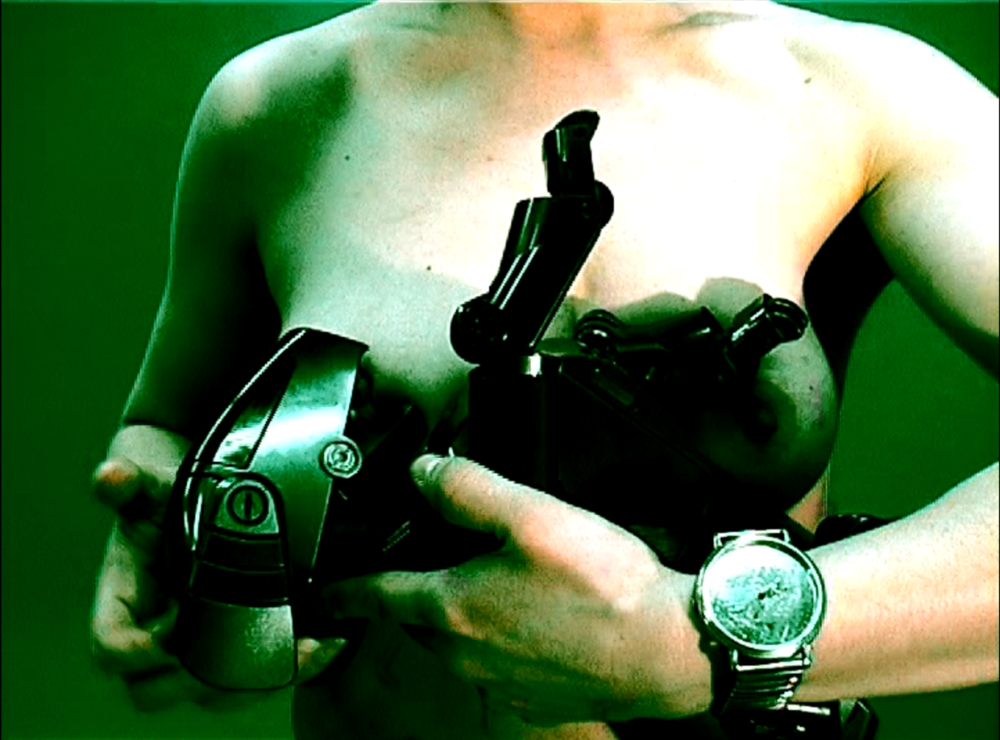 The politics of cyborgs in postmedia culture

The constant growth of electronic devices in human life prompts the question of whether we have become cyborgs. Some say it is true[1]. We are all cyborgs because such a time has come and the human condition has changed. Due to the various extensions, the human being is perceived today as a hybrid, part biological organism and part interactive, electrical and mechanical. A cyborg is a cybernetic organism, i.e. one in which information and energy circuits controlled in a programmable way are present. A cyborg is also understood as something that transcends the binary oppositions between the live and the dead, cultural and natural, animal and human.

Being in between, in suspension is important, because on the one hand we agree that the electronic devices that define us form a unity with us but on the other we know full well that cyborgs are created in scenarios of scientific fantasy[2]. One can undoubtedly speak of a gradation of being cybernetic. The first stage is about extensions of the organism in the form of computer and electronic equipment. Incorporations, implants and prostheses are worth considering in the second stage. The third stage would be about artificial bodies in which minds are stored.

The cyborg phenomenon is also linked to astronautics and armament[3]. The idea of ​​creating a cybernetic body is closely related to the desire to travel in outer space without a spacesuit and protection. This phantasm strongly determines the subject of interest. Only exceptional equipment can meet those requirements. Maintaining a similar level of expectations, it is worth mentioning that at the same time both cybernetic military robots serving as soldiers and external skeletons serving as extensions for soldiers are being created. The latter help lift weights beyond human capacity and are something of a modern-day armour.

In the artistic dimension we encounter all sorts of situations. There, an active role is played by detectors and sensors that examine the functioning of the human body, read and monitor the pulse, blood pressure, body temperature, and brain waves. Artists show three stages of humans unifying with computers and electronic equipment. The first is when a device is a partner, an observer. The second one is about incorporation and a work of art is a testimony of this process. The third stage is an idea embodied by robots where the organism is artificial from start to finish and the living element is a set of rules and a dictionary that replace intelligence as the language.

It is worth asking how a cyborg socializes[4]. What is needed in the community for a cyborg to be accepted? What social problems does becoming a cyborg cause? Is the fundamental axis we perceive between the live and the artificial at the same time a line of contention between proponents of traditional, conservative solutions and liberals or revolutionaries? As such, has capital predetermined how AI research will be conducted? Is interactive art destined to become something popular and common?

Five artists were presented at the exhibition: Barbara Konopka, Jakub Jasiukiewicz, Paweł Janicki, Andrzej Wasilewski, and Marek Rogulski. The first artist presents a video set that includes works: Alice & Aibo (2003), Memetic Infection (2003), Hibernating Chips (1999), and Binary Notes (1998). Each of these films is about the invasive[5] nature of language and computer technologies, their interpenetration and synergy with the human body. The author problematizes the boundaries and the duality related to them: alive and artificial, cultural and technical, mental and informative. Although the video is the initial medium, sound and text, which often comes to the fore as mosaics, ornaments or slogans and commentaries are important aspects. This strengthens the feeling of interacting with the meta-medium.

Jakub Jasiukiewicz, also speaking through the medium of moving images, refers to the concept of the event’s title and relates it to the current pandemic. In his essay Artificial Respiration (“Sztuczne Oddychanie”) (2021) he describes a situation that involves the distribution and use of respirators. Interestingly, in this perspective all those who, for reasons beyond their control, have found themselves in the most extreme life-threatening situation, have unwillingly became cyborgs.

Paweł Janicki shows us how an Internet application can be used to generate a synergy between an interactor and an artifact. In his Mechanical Garden after Tytus Czyżewski (“Ogród mechaniczny według Tytusa Czyżewskiego”) (2011-2019) one can find words arranged in two series, which collide with each other with the help of viewers’ reflections in a frame and generate sound. In the symbolic layer butterflies and flowers are evoked which names come from a literary work by a well-known Formist and Futurist.

Andrzej Wasilewski builds the narrative of The Flowers of Evil (“Kwiaty Zła”) (2018) by means of databases and with reference to a literary work, this time by the French poet and critic Charles Baudelaire. His hybrid object is a program that uses Internet resources, the results of which are translated into the movements of artificial flowers that dance and cast shadows on the wall. Comprehensive statistical data pulled from the Internet is presented on a separate screen. This interpassive[6] work feeds on the evil generated by humanity.

Marek Rogulski develops a reflection on the condition of the contemporary civilization by materializing certain ideas and the art of concepts. His ICS Systems (2020) is, on the one hand, a solid, massive steel object, and on the other hand the artist brings it into an ethereal, intelligible context related to the new humanities. As he claims, he is interested in developing alternative categories that better fit the existing reality of the circulation of values. The object reveals a resemblance to a lectern and a scroll and alludes to the knowledge-authority pair of concepts, as well as to the traditional ways of storing information. 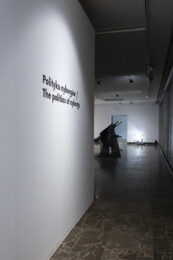 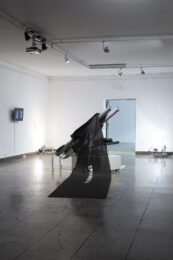 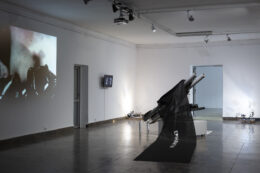 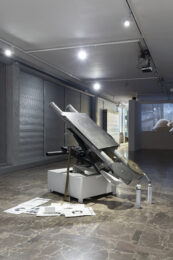 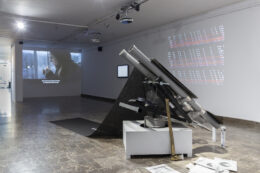 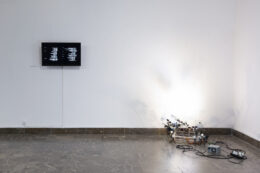 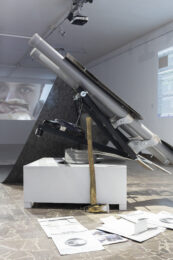 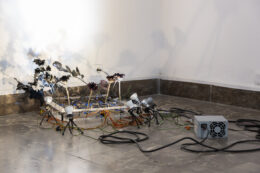 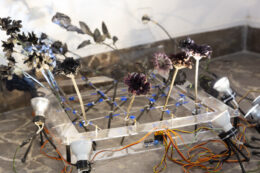