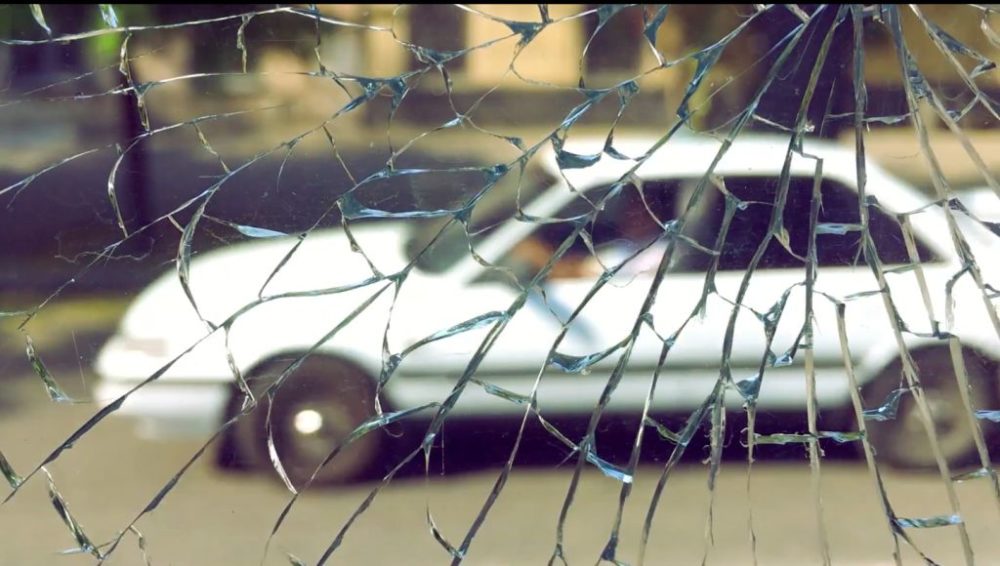 The title of the show, Tale of Novorossiya is a reference to Donbass, Rise! Tale of Novorossiya – a table reading directed by Pavel Yurov of a documentary text created on the basis of articles in Ukrainian press and social media. The director confronts Novorossiya, a land created by Putin’s ideologists, with Donbass, destroyed by warfare. It’s a space where truth and lies meet. The return to the historical period to justify the war in eastern Ukraine shows a high degree of appropriation and manipulation. Using it in the title of a play or an exhibition is not meant to confirm the existing designate, but is it ironic enough not to strengthen it? Does the transfer of the threat into the sphere of myth make it at least a little bit unrealistic?

Ukraine is a country in a rather special situation, where war has been going on for six years, a war not meant to lead to someone’s decisive victory, but to maintain the destructive status quo, destabilize Ukraine and keep it in a deepening stagnation. Ukraine is disappearing from our sight; we are not interested in it. The euphoria connected with Maydan is over, respect for the quality of discourse that accompanied it has given way to dormant demons. The madness of different divisions of “-isms” is flooding Europe. Ukraine, as a state at war with its former ally (brotherly nation), has many reasons to want to cut itself off from the past, only to fall imperceptibly into the populist trap of nationalism, to pass over this chapter of history without reflection. Meanwhile, one cannot build one’s identity solely on the basis of repression. Artists are aware of this, they reach back to history and analyse it not to look for reasons for glory in it, but to understand the mechanisms that lead to error.

Lada Nakonechna, Nikita Kadan and Mykola Ridnyi, each in their own way, address the problem of a loss of a shared historical narrative and attempts to regain it and the role of art, and more broadly culture, in the above process. Piotr Piotrowski would stress that he was interested in “art as critical practice, to some extent anti-historical, encompassing the language of official historical doctrine”. The works of Ukrainian artists are characterized by such an approach. In their artistic practices, they explore the dynamic opposition between memory and history. The latter, when reconstructing, problematizes the past and in a way suppresses memory. Speaking about his work, Nikita Kadan stresses that he is interested in the politics of commemoration, the forms of narration of collective and individual memory, and the influence of ideology and politics on these forms. Artists work with archives, they are interested not only in museums as a way of presenting the past, but rather as a tool for understanding the present. The contemporary context is crucial for them. Diagnosing reality, they objectify it, avoid simplifying assessments, pay attention to the ambiguity and complexity of processes.

Romantic depictions of ruins referred to entropy and to pan-nature, which took over culture as human creation. However, the Historical Depictions of Contemporary Ruins by Lady Nakonechna were created by civilisation and culture which continuously produce ruins, fresh ruins, which are not a legacy of the past, but contemporary evidence of destructive activity, including domination over nature. War-destroyed buildings remain in the centre of the field of view as important artefacts. Their aesthetic quality, paradoxically, corresponds to our perception of the war in Donbass. Nikita Kadan does the same with the melted pieces of windowpanes, a result of the war in Lugansk. He carefully places them in the illuminated display case – he musealizes and aesthetises the already beautiful forms of the sculptures produced by the war.

“Museum procedures” often appear in the contemporary art of Ukraine.  Artists vividly discuss the role of institutions, devote much space to avant-garde tradition and artists, especially in view of the appropriation of Ukrainian abstractions by the term Russian avant-garde.

Museum discourse needs an artefact, an exhibit through which it can tell a story, something on which a myth can be built. In a series of works by Lada Nakonechna, titled Flags, in showcases with colourful glass (referring to the colours of national flags), a cast of a stone found by the artist in a historical place is exhibited. Neither the place nor the originality of the artefact are that important. The exhibited object loses its authenticity or gains a new one depending on the way it is exhibited; it remains a proof, but it is open to interpretation. The same stone, depending on whose colours it assumes, takes on different meanings.

Phrygian Obelisk by Nikita Kadan is linked to the mythological figure of Attis, a symbol of eternally reviving nature. In various versions of the myth, the genitals cut off by the hero in a fit of madness turn into plants or fungi. The obelisk grows out of a vegetable garden, which inconspicuously reminds one about spontaneous gardening in downtown Kiev during the Maydan. The garden refers to the worship of Attis but also to the laws of vegetation, first and foremost to the cyclical nature and reversibility of processes. Both a vertical metal object of human height and plant matter represent mankind; the Donetsk architectural catalogue complements the semiotics by placing a metaphor in the context of a place.

At the exhibition, Mykola Ridnyi presents a film, or rather a series of films entitled Armed and Dangerous, in which he focuses on the problem of militarization of Ukrainian society, especially the attitude of young people towards violence and arms. The film shows the fragile condition of Ukrainian society threatened by war in the East and struggling with ultra-right narrative, looking for identity, or maybe just a dignified life. At the same time, the film presents a metaphor for the ways of functioning in an area engulfed in hybrid warfare, not entirely real, not fully conscious. After all, it is possible to live with such a war in the background; life goes on, the state functions somehow, people go to work, and artists make art. The media are silent about the war in eastern Ukraine, which is not a hot topic. 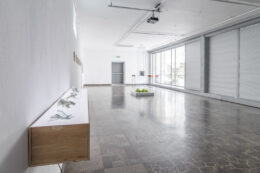 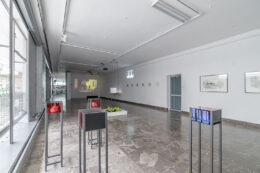 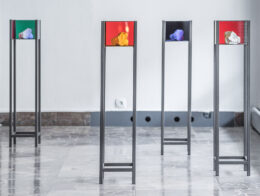 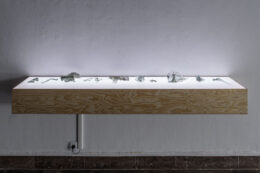 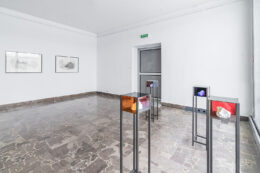 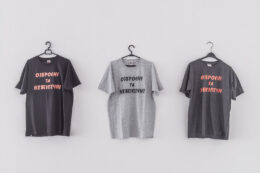 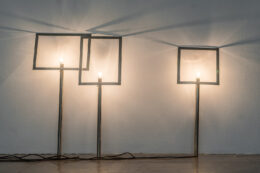