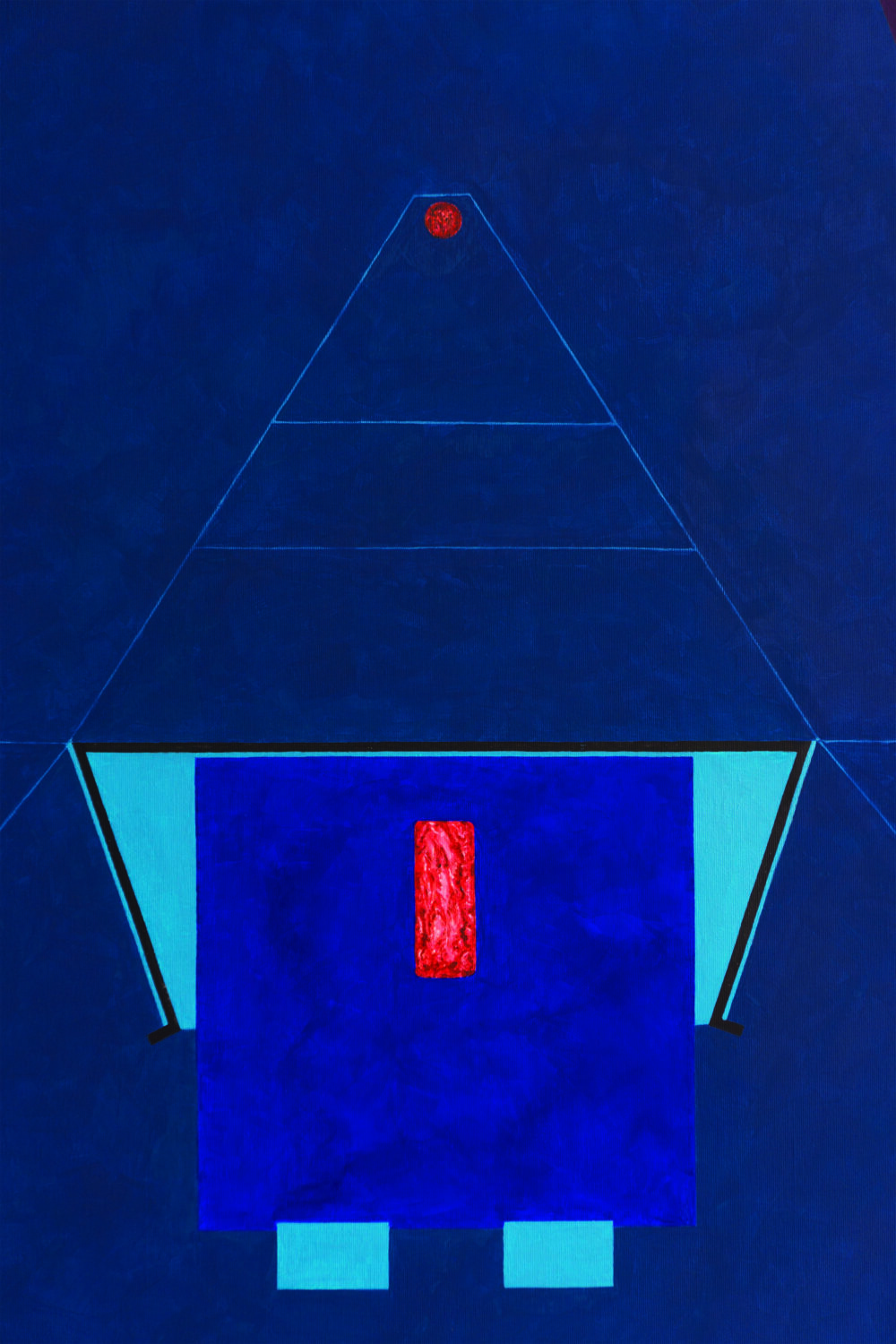 We were planning a completely different exhibition with Grzegorz Sztwiertnia. It was to be a new incarnation of his latest series Polish Towns II – Afterglows, referencing the architecture of Polish multicultural province seen through the reliefs of Frank Stella Polish Village Series (1970–1974) and drawings of Władysław Strzemiński from the time of Nazi occupation. The premiere took place this year in Bielsko-Biała and we tried to choose a set of works for the Poznań audience. However, when you work with an artist who lives a life of passion, fascinated by tracing the meanings of words and (closer and more distant) relations between concepts, one moreover sensitive to the potential of old traditions and spiritual systems, this fascination can be contagious. So can be curiosity and what has already been discovered pales confronted with what is yet to be discovered. This is precisely what happened this time and this is how the exhibition called Perineum came into being. The paintings on display belong to 2 series. The first one is called Draperie / Drapes (Perinea nocturna) and includes canvases made specifically for this particular show, not displayed earlier. The other one is Lekcje szycia / Sewing Lessons.

The Poznań show of Grzegorz Sztwiertnia reflects the artist’s present-day fascinations and pursuits. Thus it has a very special character, because it also has a significant research character. For those who know Sztwiertnia’s oeuvre this will hardly come as a surprise. The Krakow-based artist reflects on surprising interrelations of words. He is very meticulous and boldly creates a kind of parallel reality enveloped in mystery. The Perineum show interweaves a variety of threads from seemingly distant worlds/realms. For those who have obscene associations and similar expectations, as after all the perineum is a crotch in Latin, I must reassure or rather disappoint – this is not a scandalising exhibition. Nor is its title a provocation, a cheap trick playing on emotions, calculated to arouse curiosity or indignation. Far from it. The human body is innocent here, confronted with beliefs (the object of a tabernacle taken from the Jewish tradition), but also with medicine (painted surgical drapes). The body is embedded in spirituality and also experiences wounds, diseases, traumas…

Man in the works of Grzegorz Sztwiertnia is invisible yet nevertheless present. Man is an indispensable element of the eternal cosmogony and as such is more exposed to Mystery than the drives. Hidden or revealed, he remains submerged both in tradition and in the real world. Both the situation of a secret prayer and an operation hidden by means of a surgical drape are profoundly intimate and as personal as possible; they are as intimate as the origin of the show’s title.

Excerpt of a text by Anna Bas (Theatre Studies expert, exhibition curator and author of texts about art) for the Perinea nocturna series:

“‘The brush should pass overthe surface lightly and smoothly’ and silently. No rubbing or scraping. Paint should be permanent, free of impurities, mixed into and stored in jars. The scent should be ‘pure spirits of turpentine, unadulterated and freshly, distilled.’ ‘The glue should be as clear and clean as possible.’ Canvas is better than silk or paper, and linen is better than cotton (Ad Reinhardt, Twelve Rules for The New Academy, Art News, New York, May 1957). This is the mantra of the “black monk of American art”, Ad Reinhardt. A nearly alchemist formula. This is where the Drapes by Grzegorz Sztwiertnia originate – in the darkness persistently practised by Reinhardt. What was still life without drapes for the old masters? An absence of drama? Shameful exposure? What would these careful folds mean for art today? Superfluous decoration? (…) What instead, then? An unrepresentative, nonfigurative, non-expressionist, non-subjective, non-manipulative, non-reducible, free, inexplicable, useless, and non-transferable painting. The terms, so fitting in the description of the works by Grzegorz Sztwiertnia, also derive from Ad Reinhardt. Strict simplicity, precise calculation and in-depth analysis of the classical avant-garde tradition. The colour on the square surface is born in darkness and explodes in a mysterious wound that opens to another dimension”.