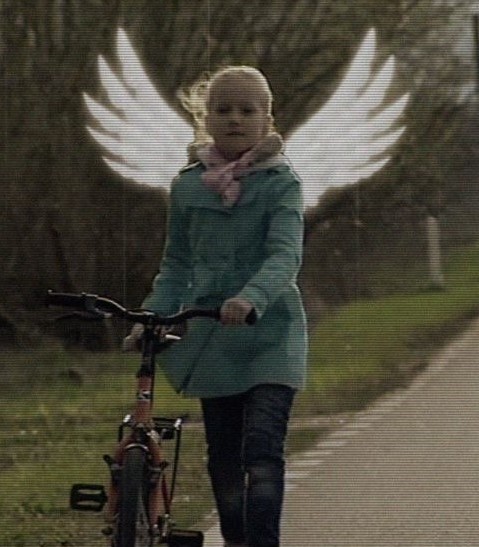 Mithu Sen, one of India’s most significant artists, is a force of nature. She works in multiple media including painting, drawing, sculpture, installation, and performance. She is a feminist, activist, and occasional poet. She makes objects as well as ephemeral actions and is constantly travelling around the globe and coming into contact with different cultures. Her work often maps onto specific trips she made to particular countries or cities. This time around, it was Poznań and Poland that Mithu Sen encountered in the process of preparing a site-specific project to be shown for the first time at the Municipal Gallery Arsenał.

The artist’s name inevitably conjures associations with the word “myth,” while her last name, from a Polish perspective, takes on an oneiric accent. It therefore seems fitting that Mithu Sen has taken an interest in the myths that circulate within a given culture. She submits them to a de(con)structive operation and a personal, anarchic act of translation, creating (un)known and (il)legible languages in the process. She is ceaselessly telling stories whose basic material and medium is human life. She guides her viewers into the world of dreaming but never lulls them to sleep – to the contrary. She wakes up their imaginations.

In her solo exhibition at the Municipal Gallery Arsenal in Poznań, Mithu Sen (de)mythologizes an episode of the Polish television series L is for Love (M jak miłość (2000–). Despite having no Polish at her disposal, she is able to empathically enter into the narrative. She weaves her own text into the story without any substantive knowledge of the culture and customs that form its context. She tells her own story about us, opening up a transcultural perspective. It is in this very episode of the soap opera that the female protagonist tragically dies. The grotesque nature of Hanka Mostowiak’s death became the target of rampant online mockery as users disseminated a huge volume of memes tinged with scathing irony. As a result, even someone who has never seen an episode of L is for Love would likely be familiar with this particular story point. What does Mithu Sen make of it? How does she “read into” the actors’ gestures and facial expressions, the tones of their voices, or the momentum of the storyline? After all, observation practices and differences in cultural production exist, above all, in relation to social experience.

The artist describes herself as a lingual anarchist. Such a deliberate and conscious self-declaration leaves little room for debate! With her signature exuberance and a certain levity, Mithu Sen insinuates herself into the Polish language without comprehending it; she teases out this epistemic trauma and illegibility so that she can make visible – for us, as Polish speakers – what has become so obvious we no longer see it, for mythologies and stereotypes have a way of preying on meaning. Language is an “inventory of cultural memory embedded with information about our history, customs, beliefs, legends, cultural myths, art, and the organizational structures of social and political life.”[1] – We are dealing, then, with a paradigmatic reservoir of mythologies. In this installation, Mithu Sen performs her operations on the language of television as a particularly intense condensation that reflects the dominating clichés of the moment.

Yet Mithu Sen not only experiments with the potential of language and the transmitted message, for she also restores to us its visual, material, bodily and sensory aspects.[2] In this sense, she stands in agreement with the theses proposed by Jacques Derrida, for whom these features are inextricably tied to that which is ideal within the written sign. The artist has therefore chosen to cover the gallery walls with lettering suspended in a state of (il)legibility. The text refers back to her reading of the episode of L is for Love. She plays with content as well as form. She allows the message to entwine itself around the white cube, luring viewers into the epicenter of a lingual anarchy. Lawless, they set off in the pursuit of myth. Mithu Sen herself stands in the face of the myth we dream in waking, dreaming up new meaning and allowing us to peer into the myths into which we were born. 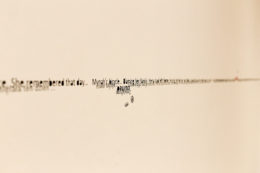 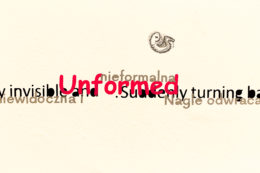 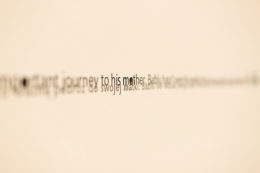 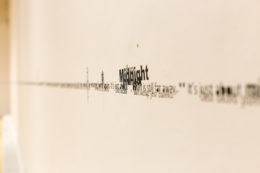 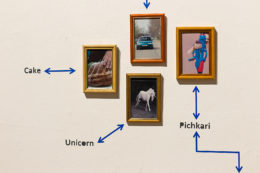 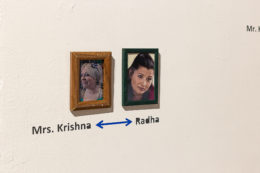 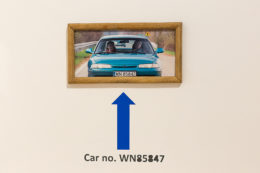 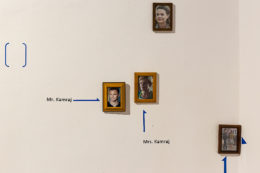 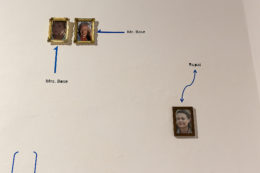 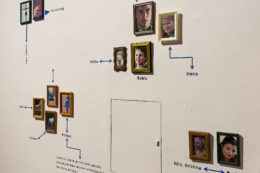 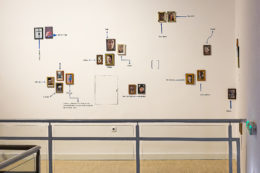 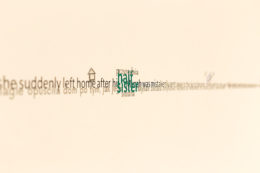 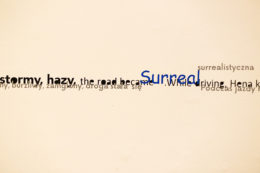 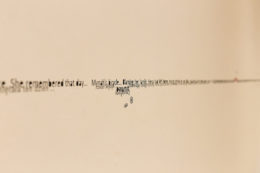