Memory is fleeting. Yet it is here that those who have passed away, those we miss and those we would like to be able to summon to our side, still live. Memories are precious, yet they fade away, disappear like erased traces, while events and people recede further and further away from us … To protect people, places and events from the destructive passage of time and oblivion, we collect photographs and keep memoirs. As it turns out, however, memories can also be … embroidered. At least this is what Bettina Bereś does. When preparing the Poznań exhibition, she again adopted this strategy, this time to talk about her mother, Maria Pinińska-Bereś and her family home in Poznań.

By borrowing the memory of her mother, Bettina feels connected to a city that she does not really know much about. The artist feels a strong bond, even though her mother, born in Poznań, did not know much about the city because she spent only her childhood in it and her parents kept her isolated from the outside world. For Maria Pinińska-Bereś, the house was a special, abstracted place. Bettina remembers well the oft-repeated anecdotes from her mother’s childhood, which are often more vivid to her than her own memories. That is why they constitute a strong motivation for creative action. They are an excellent inspiration to arrange fragments of a non-existent world in gallery spaces.

The artist has repeatedly presented her set-ups, consisting of old furniture and family photographs printed on white pillows. Some of them, unknown in Poznań, will be shown in the Arsenał Municipal Gallery. However, Bettina has also prepared a new work for the Poznań exhibition. It is a tablecloth that evokes the memory of a funny childhood incident of her mother and her mother’s brother. One evening the children woke up in their beds and it seemed to them that there was no one around. Dressed in night shirts, they set off to explore. Every single room was empty, yet suddenly they came across a lavishly set table in the living room. Brought up in a strict manner and fed with thoughtful moderation, they were completely stunned by the sight, admiring the illicit mayonnaise and the usually rationed eggs. Unable to resist the temptation, they climbed onto the table and began the first big feast in their short lives. All of a sudden, however, the door was thrown wide open and the madness of unbridled gluttony was interrupted … by guests entering the party. There was shock and consternation. The children were taken out of the room like unruly animals, by the folds of the shirts on the back of their necks …

Apart from a huge tablecloth, a reminder of this funny anecdote, the exhibition presents tapestries with provocatively sounding slogans, patterned after maxims once embroidered by housewives. Those from the past concerned cleanliness, health or so-called life’s truths. The present-day ones, made by Bettina, also convey “life’s truths”, but they are completely different; they are subversive and humorous, with a feminist tinge at times. However, the author, much as she supports feminism, is not – like her mother – in favour of combining art with ideology. She has always believed in the independence of artistic creation and avoided links with the here and now.

Then there are also paintings. They are colourful, fun and in large measure capture memories. For many years, the artist has painted tender “portraits” of everyday objects that are dropping out of circulation, replaced by new designer dishes or appliances, which are functional, ergonomic and beautiful, but have no soul … They are in stark contrast with, for example, tin enamelled pots from Bettina’s paintings, all of her pots, bowls, bottles, or lamps, whose life-spans are prolonged by the artist. The artist uses remarkable colour combinations, which transform those seemingly ordinary things into objects of great beauty. Common, everyday objects are ennobled, become painting performances and gain new life as works of art. On the one hand, this metamorphosis indicates the artist’s tender feelings to the somewhat old-fashioned form of the objects, and on the other hand it is a kind of eye-winking to the viewer. Bettina likes to joke; she likes to play with form and shape, colour and words, and she embroiders these words on tapestries … She adores painting. She began to paint to counter the artistic actions of her parents. Painting became her escape and, paradoxically, here she felt avant-garde. This is because she had found her niche in the world of art, dominated at the time by performative activities, installations and photographs.

The most important element in this exhibition is the past and memories of memories, or what Bettina remembered from the stories of her mother, who was a genuine raconteur and found a kind of self-therapy in her lively narratives. The power of the message must have been significant, since for Bettina, then a young girl, the stories from the past were so important that she kept them in her mind and – importantly – nurtured them later in her adult life. This is what she has been doing until today. No material souvenirs have survived from Maria Pinińska’s years spent in Poznań. In 1939, the train carrying the belongings of the family was bombed. Maria’s tales are the only thing left over from the time when she lived in Poznań and her daughter’s contemporary work does not let these stories fade. Perhaps that is why it is hard to resist the impression that the output of Bettina Bereś is based on silent opposition to passing away, and the space of her exhibition is an enclave in which memories take on a material shape …

Daughter of sculptors and performers of the “Krakow Group”: Maria Pinińska and Jerzy Bereś. Between 1978 and 1981 studied at the Jagiellonian University in Krakow in the Art History Faculty, between 1985 and 1989 established and ran the Zderzak Gallery in Krakow in collaboration with M. Tarabuła. In 1995 co-creates Otwarta Pracownia Association and Gallery. Member of the Union of Polish Artists and Designers (ZPAP). Paints and embroiders. Lives and works in Krakow. 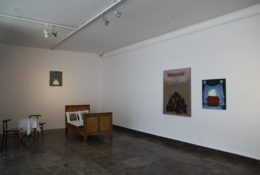 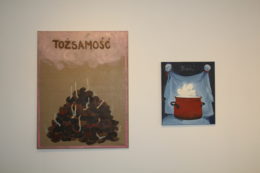 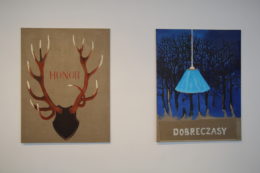 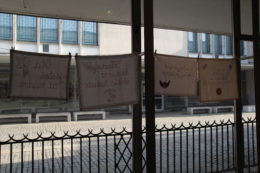 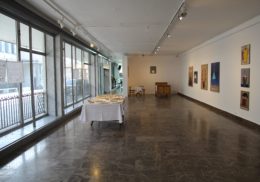 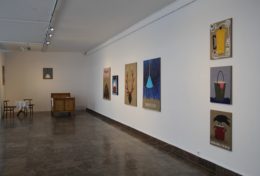 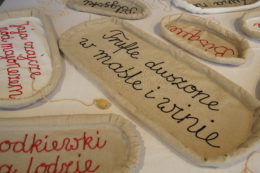