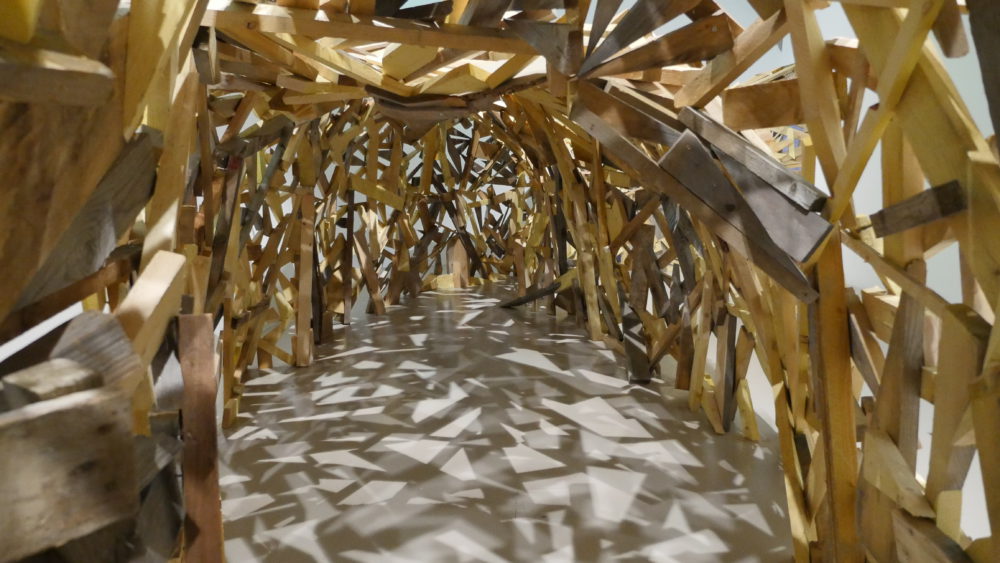 What does it mean to live? The works of Tatiana Wolska consistently undertake a reflection over the question of widely understood habitat as a place of our functioning. The moving, dynamic structures, which bring to mind the forms of organic living sculptures lead us to associations with corporeal life seen as the dynamic, constantly new and surprising force. There is no space for the opposite force – the inactive or the passive. The characteristic for Western philosophy chain of metaphors ‘to build – to live – to think’ depicts that Western people construct their metaphysical shelter in a presumed extracorporeal abstraction and transcendence. Meanwhile the phallic ‘rhetorics of architecture’ found in the medieval towers of Tuscany San Gimignano, American skyscrapers or contemporary impressive buildings of growing rich Asia, solidify the patriarchal conviction of both ‘the neutral nature’ and ‘universality’ of the male body, as well as the self-sufficiency of an abstracted human subject.

A woman is the ‘other’ of a man. Her body symbolises the degraded and the suppressed in the patriarchal culture. To ‘live’ in Greek polis, in other words, to be born as a citizen, you needed to renounce the ‘scar of a navel’ – you had to die as a son of a woman. Feminity, fertility, and a body became delegated to the sphere of Oikos, a private sphere. Renouncing the relational, and what follows the corporeality of own condition represented the most important axiom of patriarchal civilisation. Contemporary psychoanalytic theories tend to tell us how our individual awareness is constructed on the basis of the act of renouncing and negating the derivation from the female, as well as the coming to the world from a female womb.

The act of forgetting own origin, the organic birth in the female womb cannot be only seen as the suppression of values prescribed to a female condition, her split indiviDUALITY, which is inscribed in the basic condition of ‘I’ pregnant with ‘others.’ It is also the acceptance of ‘the lack’ or ‘incompleteness’ related to her supposedly passive and determined ‘nature.’ The belly of a mother – as a first home – is not only supposed to be degraded and sent to the domain of nature, but also it is completely suppressed. In the imaginal world, it is not symbolised in any way.

The philosophy of Wolska’s work deals with breaking away with the myth of ‘limited organicity.’ ‘Matrix’ constructed by the artist refers us to the Latin word ‘matrix’ – the womb. Matrix as a matter escapes the process of symbolising. It is an incarnation of something that from the start has been excluded. Therefore it returns traditionally as something negative (for example the patriarchal model of reproduction as non-identical with itself ‘monstrousness’). As such, a matrix has a subversive potential of a redefinition of contemporary ‘technological polis based, partly, on a revolution in social relations – within Oikos, family household.’[1] It is worth mentioning here the Israeli theorist, psychoanalyst and an artist Bracha Lichtenberg Ettinger, who has been developing the theory of ‘matrix.’ For her, the permanent (genetically female) becoming in and with ambiguity, blurring the borders stands as a matrix-ridden metamorphosis – metramorphosis. ‘Matrix is an unconscious space of simultaneous existence and disappearance of I and the unknown I-not, which is not accepted or rejected – writes Lichtenberg Ettinger – Matrix is rooted in female/prenatal interrelations and it reveals a joint liminal space, in which what I call the differentiation-in-co-existence and the distance-in-closeness smoothly emerges and re-organises itself in metramorphoses, which are produced and which constantly produce relations-without-bonds on the borderline of presence and absence, object and subject, I and the alien.’[2]

Wolska’s constructions – travelling, transforming themselves, ‘monstrous,’ fluid and self-shaping – represent a new matrix of matter. It is something which alludes to ‘the womb-like’ and ‘fleshy’ body, but it becomes fuller, because it allows perceiving otherness, existing in the ‘I’. It is also a method of understanding the identity as something always emerging from the becoming, in other words – from growing out of the ‘otherness’ as a gradually self-shaping difference. Their horizontal nature reinstates in us our relationality and organics, corporeality seen as an active body formed and united by permanently negotiated social inscriptions. Therefore it may be subjected to changes and transformations, it may be renewed and emancipated. ‘Matrix-like’ experience changes the sense of subjectivity, which becomes more a result of a constant process rather than a self-sustained complete image of sole ‘I’. And however the dimension of matrix borderline always unconsciously alters patriarchal, phallic order, the very fact of practising ‘matrix’ art allows us to become aware of that. The inclusion of the female need and meanings in the creative process, the practice of ‘metramorphosis’ – the metaphorical womb-morphosis, meta-monstrosity – is the creation of ‘matrix’ space of female Other. It is a post-encounter (in metramorphosis), where the race and sex do not delineate any ready places. All we need to do is to read, to learn, to understand those created meanings to change the reality forever. Living means cohabiting, in a body and outside it, with others. Habitat (the way we conceptualise the space) changes our habitus – the method of functioning and understanding the reality. Living means to move and change, an identity is a creative project. Patriarchy is a ‘dispersed system’ which may be modified by various and diverse relations between ‘I’ and ‘others’.

[1] I refer here to the definition of cyborg by Donna Haraway, which is a phenomenon of the oppressed technology in the imitation of nature, but simultaneously it possesses the potential to reevaluate patriarchal relations. In Western thinking, as Haraway claims, dominated by the male tradition of progress, appropriation and the use of nature as a source of cultural production, the relationship between an organism and a machine is represented as a state of constant war. Meanwhile, the cyborg emerges on the border-line between the human and animal world and the world of machines. It incarnates the anti-phallic narration. We are the cyborgs, the hybrids, the mosaic, chimaeras, ‘the machine is us, it is an aspect of our corporeality’! I find interesting the network of juxtapositions, multi-dimensional ‘machinery’ in Wolska’s constructions in relation to the cyborg idea. See.: D. Haraway, “A Cyborg Manifesto,” University of Minnesota Press, 2016. ProQuest Ebook Central. https://warwick.ac.uk/fac/arts/english/currentstudents/undergraduate/modules/fictionnownarrativemediaandtheoryinthe21stcentury/manifestly_haraway_—-_a_cyborg_manifesto_science_technology_and_socialist-feminism_in_the_….pdf 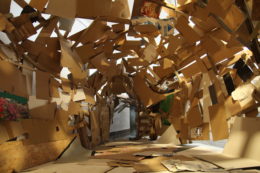 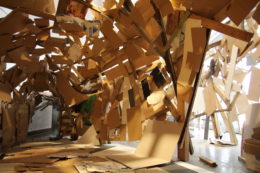 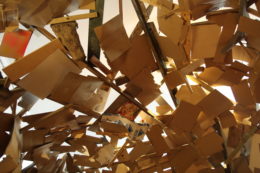 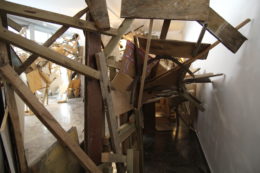 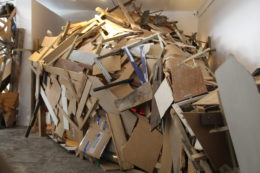 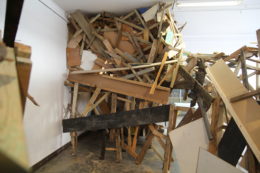