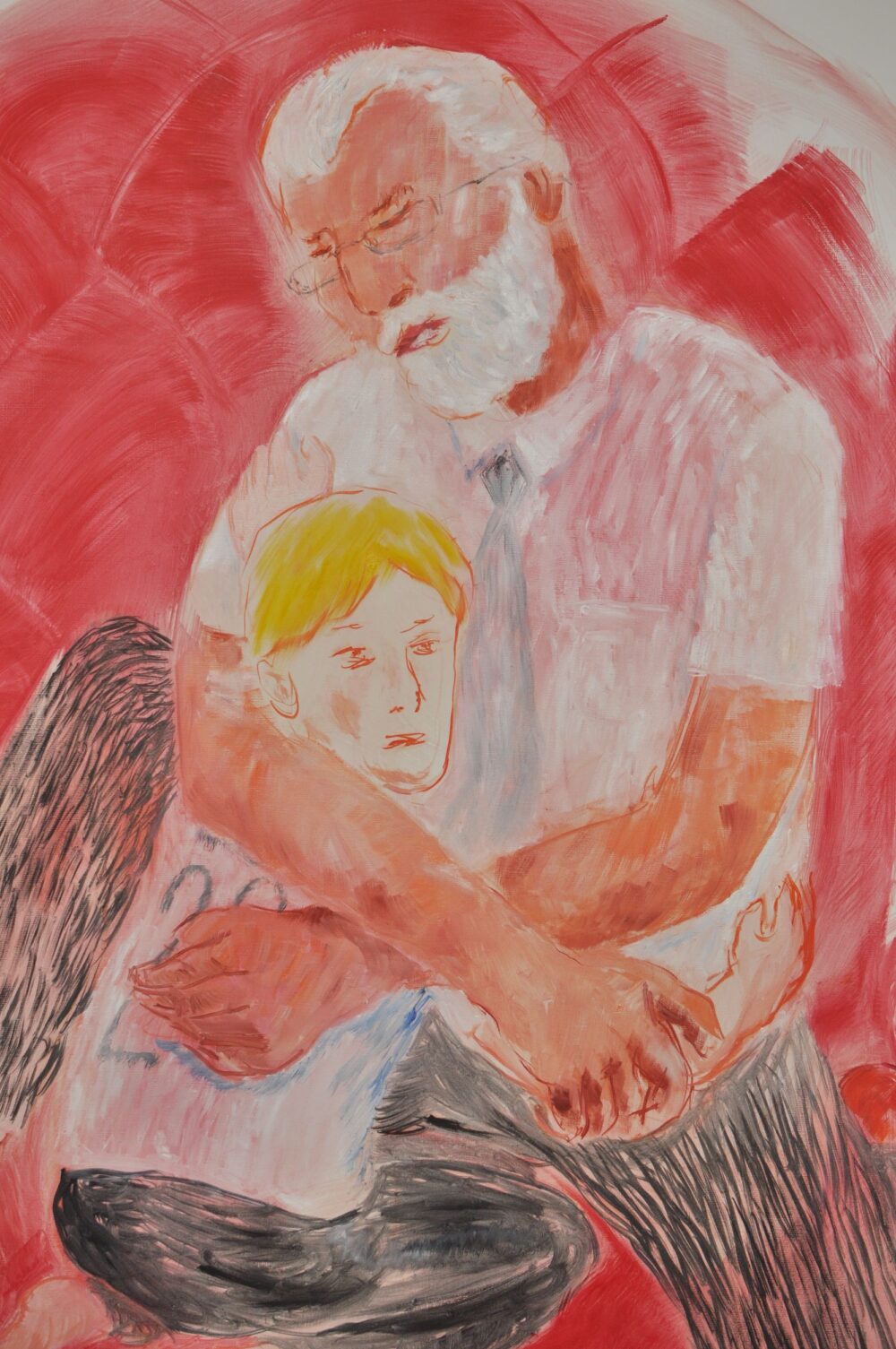 Bogna Błażewicz asked the Artist questions prior to the exhibition.

Tell me please a few words about the title of the show. Viewers might be asking themselves: “What are we going to be late for?”

Perhaps it is too late for this question… Reflection comes “too late”. What I had in mind when I made the painting installation on the wall of my room some time ago, an installation which offered me the title of this exhibition, were reflections e.g. on my age and the limitations I face. This might seem funny as I’m only 29 and supposedly there so much still ahead of me, and yet I feel anxious. I fear that it will be too late to be a naive, childish, boyish, and better person; too late to fall head over heels in love, to be passionate about something, to build relationships with my parents because they might be gone and with my siblings and friends because I will neglect them anyway. It might be too late for the unstable life I live, to paint such pictures, to do art, to lack style, to make corrections, etc. Another crucial issue for me is that in Poland at the age of 36 you stop being a young artist. This is inscribed in a lot of regulations, so I’m facing the last 7 years of youth and then comes middle age. I guess I also mean here that “it will be too late” is my attempt to avoid confronting reality. I am stubbornly returning to my misplaced childhood because I am overwhelmed by everyday life, but it may also be “too late” for that one day and that is what I am afraid of.

The protagonist of your paintings, implicitly you yourself, is ashamed of his own sensitivity and yet wants to manifest it. Why the duality and why the shame?

I’m not entirely convinced that I’m actually as sensitive as I appear to be. I often doubt it and I believe these paintings are expressive of that doubt. The duality is in me and the shame you ask about is probably due to an attempt to look at whether what I’m saying is really so “sensitive” and what all this sensitivity (?) means anyway. I think it’s all about trying to unmask in myself and demonstrate outwardly that duality you mentioned. I want to admit it and talk about it. The most difficult moments are those in which I bite my tongue, because of “what will others think of me?” It is certainly more comfortable for me to project myself as sensitive, but a large part of me is something I am probably most ashamed of, precisely this lack of sensitivity, an egotistical preoccupation with myself and indifference to others. This duality involves also the lingering toxic masculinity. I try to tear it out of myself, to get rid of it, but it often continues to return. I try to deal with it somehow, or at least visualise these attempts.

Your paintings feature family members and friends. Do you try to come to terms with difficult relationships through painting? Is this easier for you than talking to your loved ones?

I find it easier to hug a painted father than a real one standing next to me. It’s easier for me to express approval of my brother by painting him at work and maybe by doing so I am actually telling him: “Hey, I’m thinking of you”. I do think of him, I think of hugging my father, but I cannot bring myself to do it. I paint to gain courage, but first I try to lay the groundwork for such a gesture. My family and friends will see these paintings and perhaps then it will be easier for me; we will start talking. I have three old friends with whom I haven’t spoken for almost two years, and I show their portraits at the exhibition. I could speak to them, but I don’t know how to do it. I think about them and want to show it.

Is painting a kind of self-therapy for you, or maybe you want your paintings to be therapy for other “sensitive” people, too?

In everything I do, I talk about myself and about how hard it is for me, about what I experience. They are usually difficult things, but they are told in such a way that, like a Trojan horse, they enter the viewer, germinate and explode within them. I realised this with one of my paintings – thanks to them I begin to understand myself better; it helps me. Unfortunately, painting won’t solve my problems, it’s like a cry for help or perhaps something inside me is calling out to me. It is inbreeding therapy, a snake swallowing its own tail. Then I have to leave my room anyway, build relations with others and live in the world out there. Maybe I know a little more through painting. I would like these paintings to switch something on in the person looking at them, to persuade them to look at reality in a different way, to get involved in my story, like in the film they are watching. Some of the paintings feature figures from the world of culture who are important to me. They make up my intellectual landscape and they help me look at certain things differently…

You paint pictures in which you unabashedly address issues of sexuality. What will you answer those viewers who accuse you of exhibitionism?

Your exhibition differs from the classical presentation of paintings. Why is the way your paintings are presented and the individual creation of the exhibition space so important to you?

I still can’t believe that one picture can tell a whole story. I have a horror vacui; this is the legacy of my family home, I guess. There were paintings everywhere; I later added my drawings from high school and it was a dense thicket. In addition, when something broke, e.g. there was a hole in the fence, someone in the house patched up the hole with a piece of wire or a wooden plank. In my house, everything was and still is a bit like that – makeshift, pieced together and densely compacted. In front of the house, in the courtyard, there are lots of stones which my father piled up and inscribed with his favourite Latin quotations, religious sentences and song lyrics. I grew up in such an environment that it is impossible for me to do exhibitions any other way. My private room looks similar to my every exhibition and is expressive of my homesickness. There are lots of elements, pictures, paper tapes, scraps, photographs, texts etc. I treat the exhibition as a soft and pliable space in which I imprint my presence. Then I hand it over to the viewer and I want them to be absorbed by it, to be taken on a journey… I am also talkative and this garrulousness results in a desire to accumulate and communicate. One thought leads to another; a fourth follows from a third. It’s like drawing a mind map. I collect and narrate. I collect memories and visual souvenirs. I’m afraid that my memory will fail me, so I write down every single thought. I try to make a real, profound imprint. I think that others will forget about me and if I tell them a lot, someone will remember at least one word and I will survive. 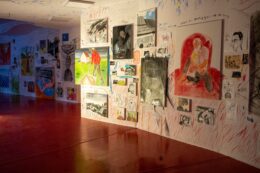 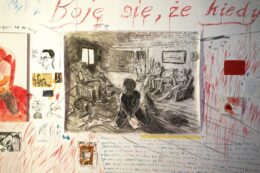 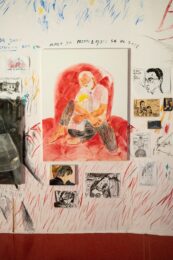 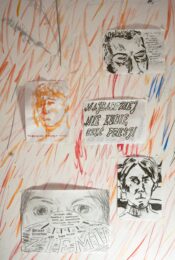 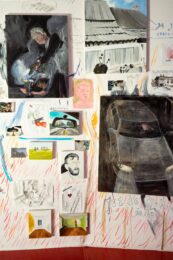 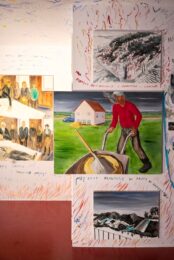 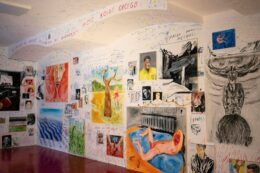 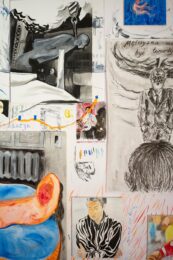 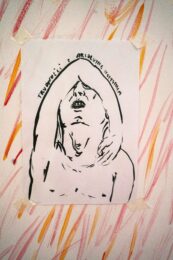 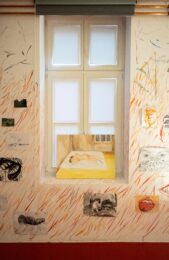 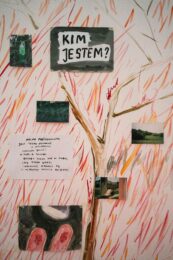 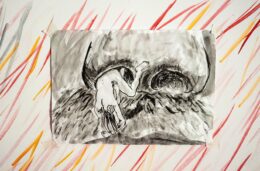 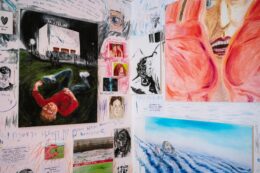 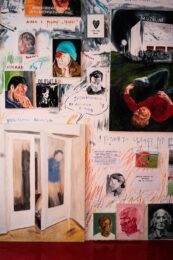