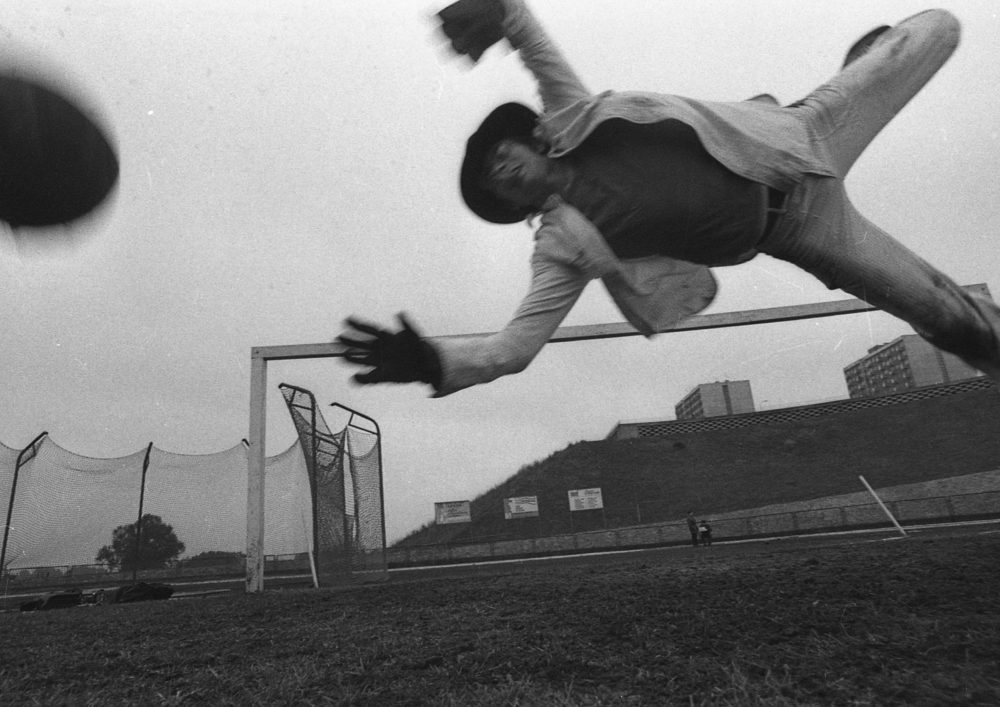 The Hard Vanguard exhibition refers to the Year of the Avant-Garde celebrated in 2017. It thus hovers in the background of the official jubilee celebrations. Being one year late, it is a rearguard really, undermining the progressive narrative of art history. The exhibition at the Poznań Arsenał Gallery attempts to capture the “persistence” of the avant-garde as a process guided by the logic of the cycle. It recurs with varying intensity in the attitudes and work of artists from three different generations: Henryk Stażewski – the Nestor of 20th-century art, an embodiment of a master of Polish Modernism, Zdzisław Sosnowski – the creator of the mythological figure of the Goalkeeper – both an athlete and himself, and Wojciech Bąkowski – a multimedia artist, one of the most recognizable figures of the contemporary art scene in Poland. All the three share the avant-garde conviction of the inseparability of art and life, manifested by creating the image of the artist as an authority, celebrity and outsider.

Henryk Stażewski – about the artist.

This extraordinary artist had a great life; let’s take a closer look at it.

Henryk Stażewski [1894–1988] was one of the greatest representatives of twentieth-century avant-garde. A painter, draftsman, typographer, interior architect, and art theoretician,

In 1923 he participated in the Exhibition of New Art in Vilnius, the first show of Polish Constructivism.

From 1924, he belonged to the Blok Group; since that time, he often visited Paris, where he met Piet Mondrian and Michel Seuphor. Photographs with these artists document Henryk Stażewski’s participation in 20th-century Avant-Garde.

A member of the Praesens Group from 1926.

In 1929, co-founder of the a.r. group – revolutionary artists – real abstraction.

He belonged to international groups active in Paris, such as the Cercle et Carre and Abstraction-Creation. A co-founder of the International Collection of Modern Art, which gave birth to the Muzeum Sztuki in Łódź. Only few works survived from the artist’s pre-war activity as the house where his studio was located was hit by a bomb. The post-war period opens up with Stażewski’s participation in The First Exhibition of Modern Art in Krakow in late 1948 and early 1949. In 1955, the exhibition at the Club of the Union of Polish Writers ushers in a new period of the artist’s work. In subsequent years, until his death, Stażewski was a driving force of Polish contemporary art. He exhibited his works in Galeria Krzywe Koło, Galeria Foksal and Muzeum Sztuki in Łódź. He persistently continued the achievements of Polish Constructivism; as a witness of his time, he was at the same time a classic of Modernism and an extremely insightful observer of the changing contemporary art. He painted in series – the 1950s, their latter half – white reliefs, later metal reliefs, in the mid-1960s – colourful reliefs, the 1970s from 1975 – white paintings with black lines. The artist’s works can be found in the finest museums of modern art: Museum of Modern Art, New York, Stedelijk Museum, Amsterdam, Musee National d’art Moderne in Paris, and Muzeum Sztuki in Łódź. His extremely important contributions to twentieth-century avant-garde and contemporary art were displayed during a retrospective show prepared by the Łódź Muzeum Sztuki in the year of the 100th anniversary of the artist’s birth, at the end of 1994. Another significant summary of the artistic path of Henryk Stażewski was a monograph published in 2005 Henryk Stażewski – ekonomia myślenia i postrzegania [Henryk Stażewski – economy of thinking and perception]. The works exhibited at the show come from the late 1940s.

Zdzisław Sosnowski (born in 1947) – in the mid-1970s created a figure of a goalkeeper, a hero bringing to mind film stars [Jack Nicholson], music artists [Mick Jagger] or visual artists [Andy Warhol]. This is what the artist himself wrote about it in 1976, in the commentaries to the Goalkeeper cycle: “I’m a goalkeeper. The means I use to notify others about it [photography, film, publications in large-circulation magazines] create my attitude. I am unable to separate myself from the media without losing what I am and what I have gained. It is significant that these media do not describe the attitude; rather, they are both its visualization and creation. You cannot talk here about the transfer of attitude without mass media and it cannot be realized in a different way. I am one with the means I use; I exist through them, I am all of this – this is my constant occupation.”

How did he implement this vision? He photographed and filmed himself. Always impeccably dressed, he wore a suit and a black hat with a large brim. He introduced himself as a goalkeeper in action, sometimes fighting in the foreground, and sometimes surrounded by beautiful women. He would always wear sunglasses and had a Cuban cigar in his mouth. He created a hero – a wonderful “galactic” athlete, adored by crowds, rich and satisfied with life. The reviewers saw the artist’s actions as both a fascination with and a critique of mass media. He did not agree with the above view. After many years, he wrote: “What has interested me instead in The Goalkeeper is my artistic problem, namely how to realistically exist through the reproduction of an unreal reality that has the appearance of truth through the potential offered by the language of the media.” [*] Sosnowski did not study the media in the time of conceptual art but used them to create worlds in which his hero, i.e. himself, lived. Here we find the question of “experimenting with one’s own identity”, many times mentioned and repeatedly undertaken by artists such as Duchamp, Witkacy and Natalia LL. This question is characteristic of many contemporary artists and, for instance, pop stars.

Wojciech Bąkowski (born 1979), a visual artist, poet, performer, film-maker, and musician. A former member of Poznań-based Penerstwo group, a former leader of music groups: KOT, Czykita and Niwea. Bąkowski’s works were presented at group and solo exhibitions, including in: The National Museum in Poznań, Museum of Modern Art in Warsaw, Centre for Contemporary Art Ujazdowski Castle, Zachęta National Art Galleryat Gare Saint Sauveur at the LILLE 3000 Festival in France, Kunstverein in Freiburg, and the Sainsbury Centre for Visual Arts in Norwich. The artist has taken part in the young art biennial Younger than Jesus, held at the New York New Museum. He is the winner of the fourth edition of the Looks 2009 competition. In 2011 he received the Polityka magazine Passport Award for an art which originally combines the brutal and the lyrical and for imparting a new and intriguing meaning to the term “multimedia artist”. In 2015, a film by Wojciech Bąkowski Głos mojej duszy [Sound of my Soul] won the Grand Prix at the 61st Short Film Festival in Oberhausen. Wojciech Bąkowski has consistently created his image of an avant-garde recluse-artist. In his works, he eagerly refers to the poetics of Miron Białoszewski, to the micro-events of everyday life, which he transforms into works of art through his expressive works. In 2012, in a conversation with Michał Lasota, the artist admitted as follows: “I agree with Schopenhauer’s view that the darker the area described, the greater the clarity and simplicity of the depiction. I deal with dark matters that are difficult to show, for example, unconsciousness, fear, forgetfulness, lack, uncertainty, etc. I do not recognize any transcendence. I take all my materials from reality. Once I have completed them and I get down to work, I have to get rid of the excess. Simple things arise. I swear that there is a lot behind them.” The artistic legend of Wojciech Bakowski is perpetuated by the feature film made by Łukasz Ronduda Serce Miłości [The Heart of Love], based on the life and work of Zuzanna Bartoszek and Wojciech Bakowski.

The hardcore avant-garde attitudes are identified with strict formal consistence, uncompromising crossing of borders, setting innovative directions, and the ethos of an artist devoted to art. The exhibition raises questions about whether the attitude associated with avant-garde, after last year’s celebrations of it, still has the power of attraction that is rejuvenating for art? Is the laboriously created image of an artist as celebrity and loner still attractive?