Self-help books claim that happiness depends on the condition of our intestines. We have reached a point of extreme self-absorption. By focusing our attention on our own intestines, we are pushing the boundaries of self-centredness. Striving for more and more control over the body and for longevity as well as the pressure of advancement reveal fear, while concentration on the individual lays bare his or her isolation.

Inspired by a popular slogan, the exhibition, however, is aimed at rehabilitating loneliness. It reminds us that man is alone, even in happiness, even in a relationship. Everyone is faced with situations that they face alone.

However, this is not supposed to be a sad statement. The works collected at the show refer more to the awareness of the individuality and singularity of each and every one of us. This awareness, in turn, means growing up. Happiness is Born in the Guts is therefore an exhibition about respect for loneliness and maturity. And it is the maturity that turns out to be the happiness hinted at in the title.

Piotr Blajerski, born in 1980, studied at the Wrocław Academy of Fine Arts. Upon graduation, he tried to practice art in line with the highest ethical standards. Around 2015, he discontinued this practice as a result of his disenchantment with the isolation and impotence of the world of art, which proved to have mainly reproduced the pathologies of the contemporary world. At present, he is looking for a more pragmatic way to handle his uniqueness, not excluding the use of art.

Agata Bogacka, born in 1976, active mainly in painting, she also makes drawings, photographs, objects, and installations. She graduated from the Faculty of Graphic Arts at the Warsaw Academy of Fine Arts in 2001. She has participated in many solo and group exhibitions in Poland and abroad. Her works can be found in numerous private and state collections, such as: CSW Ujazdowski Castle, Zachęta – National Gallery of Art, ING Polish Art Foundation, Bank Austria Creditanstalt. She lives and works in Warsaw.

Magdalena Hueckel, born in 1978, a visual artist, theatre photographer, set designer, traveller. Author of photo albums Anima. Obrazy z Afryki 2005-2013 (nominated for the Photographic Award Publication of the Year 2014) and HUECKEL/TEATR (nominated for the Photography Award Publication of the Year 2016). She cooperates with Tomasz Śliwiński on making films as a scriptwriter and artistic director. Their documentary film Our Curse received an Oscar nomination and several dozen awards at international festivals. She cooperates with over a dozen theatres in Poland on a regular basis. An alumnus of the Faculty of Painting and Graphic Arts at the Academy of Fine Arts in Gdańsk. A scholarship holder from the Ministry of Culture and National Heritage and the City of Sopot. Between 2002 and 2004 she formed a photography duo with Agata Serafin: hueckelserafin.

Edyta Jabłońska, born in 1987, with a degree in Pedagogy (specialty in culture and education) from the Jagiellonian University, in Art Education in the field of Visual Arts from the Pedagogical University and in Photography from the University of Arts in Poznań. Her interests include found footage and new document. She lives and works in Poznań.

Aleksandra Kubiak, born in 1978, visual artist, author of performances, films, spatial forms. Her works examine the social efficiency of art. In the 2002–2013 period, along with Karolina Wiktor, she was a member of Sędzia Główny Group. After the group discontinued their activity (2010), she resumed working solo. Since 2014, she has been at work on an autobiographic series of works. A holder of a scholarship from Poland’s Minister of Culture and National Heritage. With Karolina Wiktor, as Sędzia Główny Group, they were nominated to Paszporty Polityki Award (2011) and Spojrzenia Award (2008); they became laureates of the International Competition of Performance Art in Trento, Italy, and of the TVP Kultura Award. In 2016, she received a Ph.D. in Arts under the supervision of Prof. Izabella Gustowska, in collaboration with Prof. Marek Wasilewski at the University of Arts in Poznań. Since 2017, she has been working at the Visual Arts Institute of the University of Zielona Góra. She lives and works in Zielona Góra, where she cooperates with Fundacja Salony and BWA Gallery.

Aya Momose, born 1988, currently lives and works in Tokyo. Completed an MFA in Oil Painting, Musahino Art University in 2013. Momose, who began by videoing performing arts acts, uses video to reveal the relationship between one’s body and voice. Through her work she urges us to reassess the relationship between video and voice. Her major exhibitions include: “Borrowing the Other Eye” (ESPACE DIAPHANES, Germany, 2018), “Voice Sample” (Yokohama Museum of art, Japan, 2014), “SENSOU-GA STUDIES (Tokyo Metropolitan Art Museum, Japan, 2015), “Artist File 2015 Next Doors: Contemporary Art in Japan and Korea” (The National Art Center, Tokyo and National Museum of Modern and Contemporary Art, Korea, 2015-2016), “Roppongi Crossing 2016: My Body, Your Voice” (Mori Art Museum, Japan, 2016). In 2017 she stayed in New York for six months as a recipient of a grant from the Asian Cultural Council.

Franciszek Orłowski, born in 1984, lives and works in Poznań and Warsaw. Conceptualist, sculptor, performer, author of installations, art objects, videos, and participatory projects. An alumnus of the University of Arts in Poznań, where in 2010 he received his diploma at the Intermedia Faculty in the studio of Prof. Mirosław Bałka and Prof. Piotr Kurka. At present a Ph.D. student of the Arts University. In 2014, as a scholarship holder, he was an artist-in-residence at the AIT – Arts Initiative Tokyo. Orłowski focuses his interests on the human person and his or her predicament.

Jaimini Patel, born 1974, London-based artist whose work investigates the agency of matter through a negotiation of boundaries, systems and performative actions.  She completed a BA honours in Fine Art at the University of Leeds, a MA in Fine Art at the Slade School of Fine Art, University College London and doctorate in Fine Art at the Ruskin School of Art, University of Oxford. Recent projects include: Fragile state, The Museum of Odessa Modern Art, Odessa, 2019; Every Object is a Thing but not everything is an object, Hollybush Gardens, London, 2018; An inventory of small acts, Archiv der Zeitgenossen, Krems, 2017; Rosina #0, Limone Space, London, 2016; Measure, Centrum, Berlin, 2016; Remainder 10/14- 09/15, blank, Turin, 2015; DADU: conversations, DADU, East Nashville, 2015; Topography Disarranged, The Queen of Hungary Project Space, Aylsham.

Sergiy Petlyuk, born 1981, media artist, lives and works in Lviv (UA) and New York (USA) Petlyuk consistently works with several dimensions – physiology of the human body and physiology of society; and with rhythmic combination of different scales – emotional and social, individual and communal, isolated and open. Created by means of new media, his works – videos and interactive installations – are a continuous investigation of the contact between body sensitivity and various life’s flows, such as imagination, memory, information, mediatization, and cohabitation. Based on the critical approach and deconstruction, he constantly tries to capture the dissonance of human nature and depict a thin and very fragile line of contact between incompatible and opposite features that manage to coexist in one social or individual body. By exploring intersections of different boundaries and surfaces – personal, psychological, cultural, and geographic, the artist tries to open up new aesthetic possibilities and create fresh visual language to provoke more advanced social meanings and to encourage coherence of individual empathy.

Joshua Schwebel, born 1980, a Canadian artist based in Berlin, uses site-specific interventions to critique the conditions and practices of contemporary art institutions. Schwebel has been awarded multiple grants, both from the Canada Council for the Arts and the Quebec Arts Council, and has worked with institutions, project spaces, and artists-run centres across Canada and internationally. Schwebel’s interest is in disclosing the entanglements of political investments in art. His work is focused within the institution itself, especially on the conflicts of interest inherent within art. He employs artistic techniques of material reconfiguration, including redistribution, displacement, infiltration, extractions, or insertions. These actions, although barely visible to the visiting public, affect the engine of the institution by imposing a supplemental artistic function, or dysfunction, onto the administrative tasks of operating the institution, and test the institution’s commitment to artistic ethics.

Magdalena Starska, born in 1980, lives and works in Poznań. Author of drawings, performances and installations. Graduated cum laude from the Poznań Academy of Fine Arts in 2005, receiving a diploma from the studio of Prof. J. Kozłowski and Prof. S. Ficner. In late 2007 and early 2008 she spend half a year studying the culture of South America. Since 2008, a member of Penerstwo group. In 2010 she received a scholarship from the budget of the Minister of Culture, and in 2014 a Young Poland scholarship. A student of Interdisciplinary Doctoral School in Poznań. Since 2016, assistant lecturer at the Studio of Development and  Transformation of Space at the Multimedia Faculty of the University of Arts in Poznań. For the past 10 years her art projects have been underpinned by the creation of communal situations. She carried out such activities at the Biennale in Kathmandu (Nepal, 2017), during her trip to Lombok Island thanks to her cooperation with Pasirputih organisation. 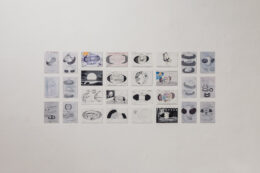