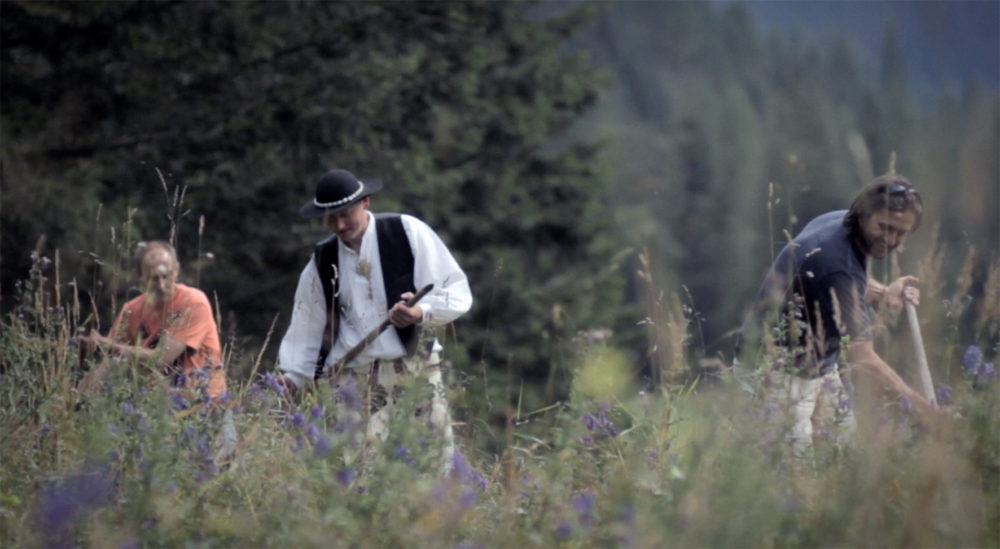 “Everydayness is an object, which withdraws itself when looked at. Everydayness seems to be ‘common things’, which withdraw at the arrival of common thoughts” – wrote Szymon Wróbel in Dwutygodnik. Our Fatherland, or as Gombrowicz wrote Motherland of everydayness is something we keep on experiencing, we live in it, at the same time, it seems to be undeserving a deeper reflection, as there are more important issues – those we aim for, the ones we dream about. When we talk about ‘everyday life’ we step into anthropology and history.

Everydayness, ‘a common thing’, a joint experience, which, in a banal way, flows every day between getting up, having breakfast and going to sleep in the evening – all of this is a perfect inspiration for a vigilant and subversive eye of an artist.

A description of everyday life has never been a non-political action. It is everydayness that is a practical test of authority’s quality in functioning and it reveals the difference between effusive declarations and the practice. Marcel Łoziński knew that when he created a document entitled ‘One day in PRL’. When Raster published a comic book by Wilhelm Sasnal ‘Everyday Life in Poland between 1999-2001’ the publication soon became a manifest of contemporary Polish art turning its interest towards the banal and the ordinary. There were no acts of valuation and a distance was preserved. The painting was ‘cold medium’. The video works we show in Poznan’s Arsenal do not always retain a cold distance to describe reality, they may also appear to be emotional and engaged. It is impossible to show all aspects of everyday life in one exhibition. We are able to present only those, which seem to be the most symptomatic signals recorded by artists.

A significant element of this landscape is a critical scrutiny of a widely understood tradition. This topic is dealt with by works of Franciszek Orłowski, Hubert Czerepok, Kobas Laksa and Jan Szewczyk. The idyllic landscape showed by Czerepok in ‘Ecosystem’ seems to be at first glance a tourist advert. We see how highlanders reap a meadow somewhere in the Tatra Mountains – the picture represents simultaneously a ritual family picnic and a manifestation of an attachment to the family heritage, which was swallowed by the National Park. The artist considers the paradox of the situation, in which the protection of the national heritage exerts the deprivation of the private ownership equating that nation.

Franciszek Orłowski’s video entitled ‘Exercises from the Memory’ is happening in a village heritage museum, which may be perceived as a symbol of Piast dynasty’s idyll. We see thatch roofs, birch trees and a well right in front of a house. This romantic landscape is interrupted by a professional cleaning company using modern equipment for cleaning vast office spaces. This lapidary shortcut captures a conflict between the old and the new, the motionless and the action, the tradition and the modernity. We find a similar tension in Jan Szewczyk’s video entitled ‘Kozacy’. The artist carried out a workshop of singing Ukrainian songs in Lublin. We may observe in the video the results of this process in an improvised concert happening in the middle of a staircase in a block of flats. Young singing men negate the initial stereotype of a mindless football fan. ‘I went with my mother on a pilgrimage’ by Kobas Laksa offers a description of Polish religious standards. The author records events happening during a bus journey to a shrine in Licheń, which is one of the most important Polish pilgrimage centres.

The question of work and a dramatic disappearance of the great industrial working class is present in the video of Julia Popławska – ‘The Solidarity Museum’. The video by Małgorzata Goliszewska discusses humorously, smartly and surprisingly an important topic for Polish people – working abroad. It is entitled ‘I’ll call you when I get there’. Social exclusion, living within a transformation margin may be observed in the films of Łukasz Skąpski, Paweł Althamer and Aleksandra Kubiak. The work by Łukasz Skąpski ‘Fitness’ depicts a small bodybuilding community, which was created in a village near Szydłowiec. The place suffered from structural unemployment. Boys from the area, who wanted to fuel their energy, equipped their fitness room with self-constructed devices. The artist clearly is fascinated with the self-invented devices, which came about as a result of poverty, or market shortcomings. ‘Teledysk’ by Paweł Althamer, which was created with the help of Poznań’s Boys Choir, was recorded at the time of the famous paedophile scandal. The work talks about the search for identity and voice of the young generation born around 1989.

The question of social exclusion, the life of those who lost during the transformation in rural areas is also present in a dramatic film by Aleksandra Kubiak ‘You’re a Cute one, sweetie’. It is a fascinating psychodrama in which the artist with a help of an actress brought to life her tragically deceased mother. This emotional vivisection is a simultaneous multi-layered panorama of existence in a small city during the state’s transformation. The work by Maja Ziarkowska ‘Ludzka’ Matrioszka’ is an interesting subjective portrait of a woman trapped in a system of ‘shoulds’ and expectations, which she as a mother (a human matryoshka doll) has to face. There is a smaller human inside her. The topic of a place for a woman and her image in a society is discussed by Jana Shostak. She decided to create a comedy docu-film about her participation in beauty contests. A fragment of this film will be shown at the exhibition in Arsenal.

It is rather difficult to talk about life in Poland while not mentioning our relationships with the ‘strangers’ and a painful problem of anti-semitism. This topic is analysed by Krystyna Piotrowska in her short video-performance ‘Polish Joke’. A group of foreigners with difficulty recites in Polish popular jokes about Jews. The others in Poland are people, who represent other sexuality than the dominating one. Jakub Jasiukiewicz presents a story of a couple fighting for the legal recognition of their relationship.

The exhibition is an encounter with a social archive developed by scientists from UAM supervised by Prof. Marek Krajewski, who collects private recordings of Polish peoples’ experiences covering the period of over 100 years. The contemporary media works concerning the issues of everyday life are also included in it.

The question of a day-to-day life seems a rather significant topic in the context of celebrating 100 years of Polish independence. While winning independence is a historical fact and a crucial point in the past, everyday life is a process, which diagnoses and describes the identity and social culture. The vision of a normal life in Poland was a dream of those who fought for independence. They possessed an idealised vision of a country, which did not exist yet. Perhaps the project ‘Everyday Life in Poland’ will contribute to the demystification of the word ‘nation’, which seems to be constantly conjugated by many. It could enlighten us about people, who lead a normal life.

in cooperation with The Archive of Everyday Life Research