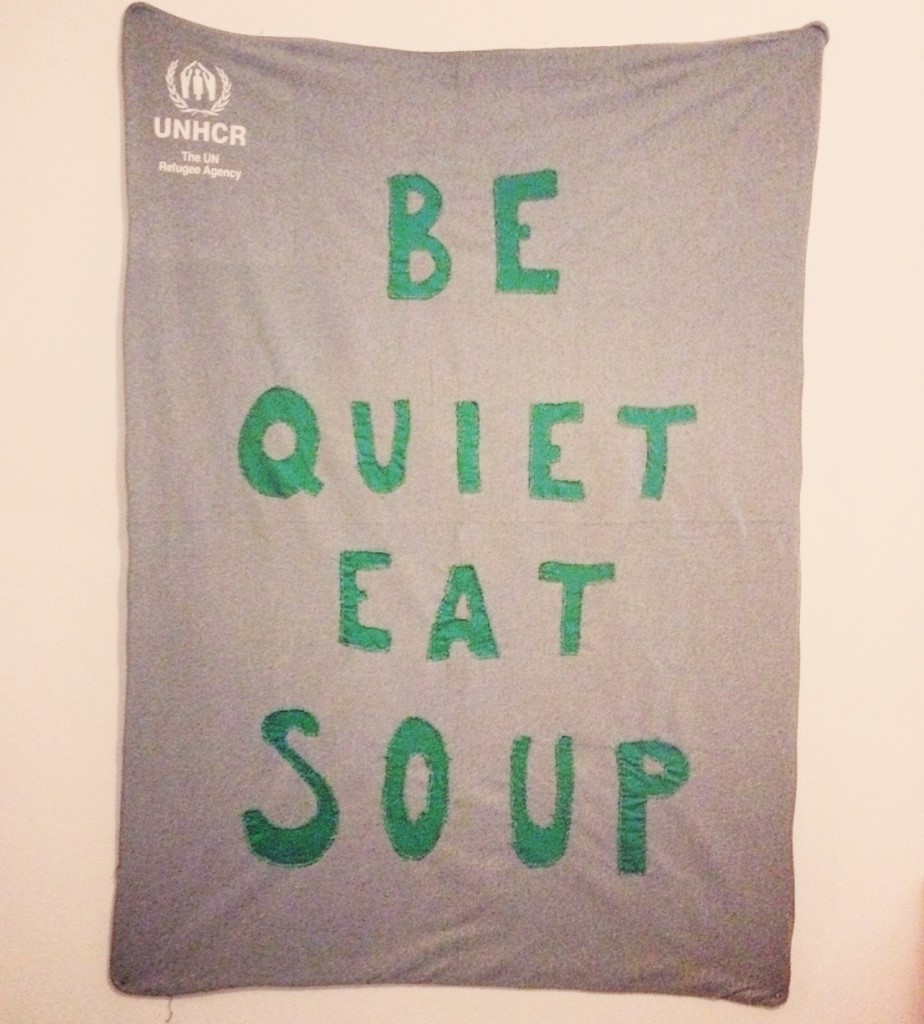 The global spectacularization of pain and misery corroborate the physical and empathic distance of those who watch from those who suffer: bodies, desperate faces, inflatable boats, grey beaches, life jackets, tent cities, all these images contribute to visually create and objectify the category “refugees” in the language of the West, consequently transforming them in being perceived as a different group of human beings. In 2016, Swiss artist Andrea Marioni spent nine months traveling around Europe, two of them in Greece, where he visited several refugee camps and lived and worked in some of them for a while. The reasons behind this travel are many, inexplicable and blurred, as often in these cases. However, does it really matter then, to understand what drives an individual to question him or herself about his or her present, willing to see a situation known only through images? Willing to have a direct experience of it? What really matters would then only be how this experience is transmitted to others.

Arriving at Eko almost by chance, because he needed to fill up the petrol tank, Marioni had to unlearn to be what he was, letting himself be filled little by little by the voices, the looks, the lives he met. Eko camp, or Eko station, in Polikastro near Idomeni, was an independent, self-organised refugees’ camp, ran by a group of international volunteers with the small presence of a few international NGOs. Marioni became one of them, being part of Eko-Kitchen, which was offering a decent meal a day to the camp inhabitants. Eko and its crowd, refugees and not, “colonized” Marioni’s way to feel and to see, his own awareness of himself and the world. The title of this exhibition, Ekonization – Hello my friend, presents the union of “Eko” and “colonization”; a colonization that acts not only on a personal level, but also refers in a specific sense to the life in the field, insisting on the anthropological aspects of the existence of communities like Eko’s, which anthem is the phrase “Hello my friend”.

Andrea Marioni invites us to let Eko colonize us through objects and references drawn from reality, encouraging everyone to find their own narrative. Towards installation, sculptures, found relics, fragments that have a connection with the reality of the camp, but aren’t its true reconstruction, Marioni works directly within the exhibition space, which becomes a space for memory and retrospection. Wooden figurines, UNHCR blankets, cups from NGOs present at Eko, flowers that Marioni received from kids: the arrangement inside and outside the gallery works as a stage in 1:1 proportions, letting the visitors create their own narrations through all these different elements. The strength of Marioni’s work is indeed in placing itself on the thin line between “what was”, “what could have been” and “what could be”: walking through the exhibition we live simultaneously multiple temporalities and multiple spaces. First, because any attempt to truthfully document the reality that the artist experienced living in Eko can only be vain: what was, existed only there and then. The witness of the events can never be fully trusted. Secondly, because that reality as it was could have been in another place as well, involving other people, happening in other times: wars, migrations, refugees’ camps are sadly part of the global history of humanity. Lastly, there is no guarantee that the reality of Eko camp could exist again in the future, in Greece or somewhere else in the world. Therefore, Eko has a universal nature that makes it a-temporal and a-spatial. It is also for these reasons that the exhibition Ekonization – Hello my friend rejects the stereotyped aesthetics linked to the usual imaginary of the refugee camp, denying any documentary aspect to the facts lived.

The exhibition is part of a project trilogy that the artist realised in 2017, including the shows In Wheels We Trust (Die Diele, Zurich, April 2017) and Fish Society (Local-Int, Biel/Bienne, March 2017), three “anthropological” exhibitions: EKONIZATION: Hello My Friend! reflecting on the idea of community, In Wheels We Trust exploring religiosity and faith, and Fish Society being based on the economy of survival. Presented for the first time at la rada, Locarno, in January 2017, EKONIZATION: Hello My Friend! travels for the first time outside the Swiss borders to Arsenal Gallery, Poznan, becoming also the first artist’s solo show outside Switzerland. One should also mention that the Eko project is structured also through a series of performances and temporal installations during festivals and group shows, such as Ekonization: Diary from Eko, Ekonization: Crazy Holidays, and Ekonization: T-shirts. In Ekonization: Diary from Eko, presented at Spazio ELLE, Locarno, in August 2018, the artist read out loud the diary he wrote during his time in Greece, while getting the Eko gas station logo “handpoke” tattooed on his leg (an older, slower and more painful tattoo technique that doesn’t requir the use of the mechanical needles). The last Eko’s chapter is Ekonization: T-shirts, a series of photographs depicting the t-shirts of the people living in Eko camp. Close-up, framed images show us written statements referring to a number of different kinds of texts, from ironic quotes to rock bands’ names to motivational sentences: a weird collection of slogans that the Eko inhabitants were wearing, most of the time without knowing what they were showing. The result is a glitch between the sentence depicted on the t-shirts and the situation in which the photographs were taken. Ekonization: T-shirts has been shortlisted for the Prix Photoforum 2018, an annual award established 26 years ago by the Photoforum PasquArt Bienne/Biel promoting young Swiss and Switzerland-based artist dealing with the photographic medium. Together with the other 14 nominees out of 130 candidates, Marioni’s project has been shown in the award’s exhibition in December 2018.

During his time in Eko, Marioni was strongly influenced by the t-shirts that people were wearing, but also their visual presence all over the camp, and as well by the use of the t-shirts as a plastic material to build ropes and hanging devices. That explains why in the exhibition EKONIZATION: Hello My Friend!, t-shirts are hanged and used within the gallery space, together with other found objects that have a connection with what the artist experienced in Eko.

Through the Eko project, Andrea Marioni tries to respectfully give a different body and voice to those who see their dignity neglected again and again, those who the world treats with inequality: questioning him and ourselves about the meaning of the humanitarian action, and the role of the artist in the face of tragedy, Marioni brings us to a journey inside ourselves that explores our relation to the Other.

Andrea Marioni (1986) graduated from the HEAD – Haute Ecole d’Art et Design, Geneva, in 2013. Since then, he presents his performances, photographs and mixed-media installations in various public institutions in Switzerland. He counts a number of musical collaborations and radio releases, as well as artistic residencies in Warsaw and Brussel. He was executive assistant of Dora Garcia at the Documenta 13 in Kassel for the artwork Die Klau Mich Show. Since 2017 he has led the Visarte project space espace libre in Bienne/Biel.

Elisa Rusca is a curator and writer based between Berlin, London and Warsaw.