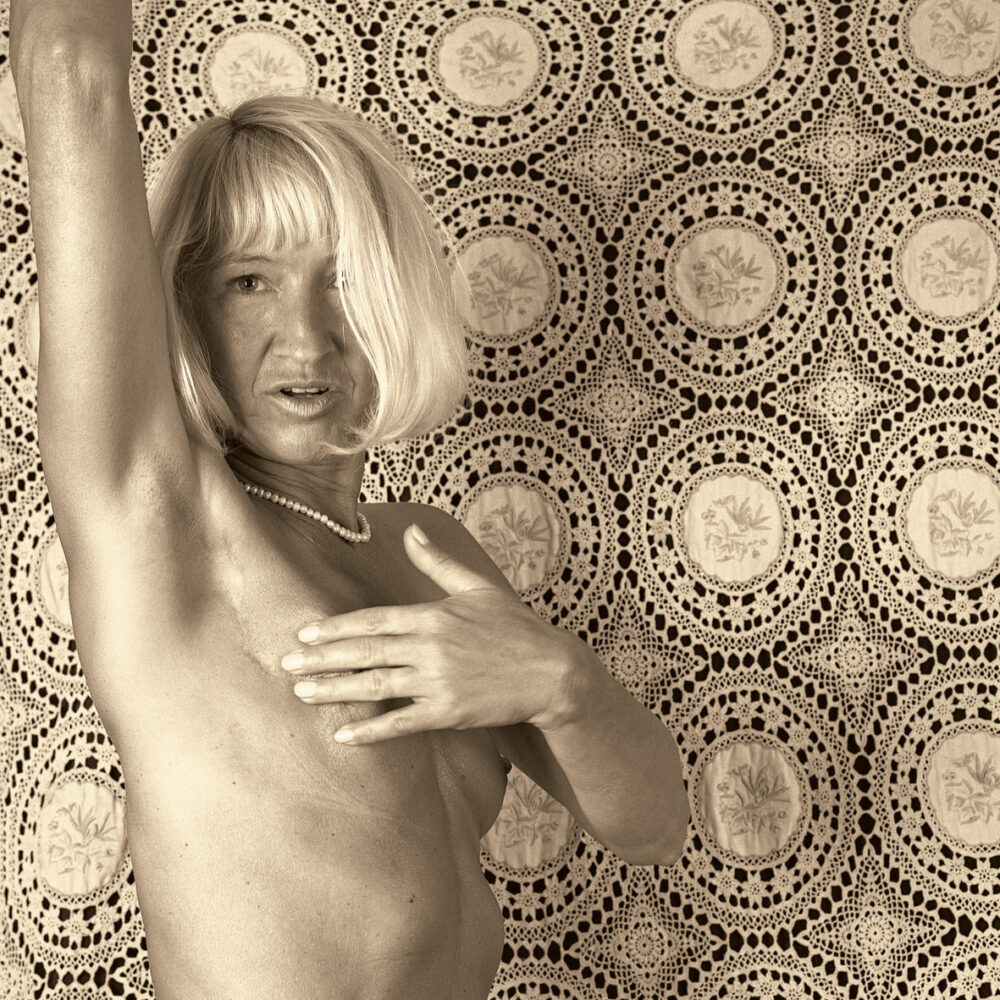 Illness is a practice, not a metaphor; it is a daily antiretroviral drug intake and a chemotherapy treatment applied periodically, it is a hand rehabilitation with lymphoedema at the Tryton rowing club. Yet, this is, most of all, solidarity that gives strength and unrelenting criticism of a society that grounds itself in the myth of a self-sufficient individual. The creativity of disease doesn’t manifest itself in a creative fever and a discharge of a genius. The Amazons demonstrate that it is quite a normal matter to create habitable worlds. You may start with a shared portion of morning gymnastics, and in the afternoon go out into the streets to manifest your rights.

Patients’ movements teach us that acts of law established in separation from disease realities remain a prosthesis imposed on society to keep it under control. The important matters are being discussed in the waiting rooms and corridors of hospitals’ ERs, in queues of people waiting for their benefits. The sick are the avant-garde of radical democracy, because it is the weakness that highlights the most systemic exclusions. A society that is hard of hearing inevitably repeats the trauma of fascism; in the form easier to apply and share.

We change the algorithms, we reverse the rules! How about a sick-leave for everyone! In an abstract society at the top of the growth index, let us talk about the matter that should never become a subject of speculation. We demand a place for the reality of a body. The exhibition entitled Creative Sick States: AIDS, CANCER, HIV aims to cast a spell on reality in which there is no space for the body, in particular, the seropositive body, the one after mastectomy, with abnormal abilities, dependencies, pains, panic attacks, and inflammations. We assume that illness is the real, and patients’ problems are social challenges that we need to deal with together. The health is a fiction, an impossible ideal to achieve. We need to normalise and socialise the disease because health has died, or perhaps it has never existed?

For the first time, we present the art of artists who live with HIV. It is, therefore, an exhibition revealing and breaking the invisibility taboo. It situates the seropositivity in the context of breast cancer. This context aims for normalisation of life with HIV so that cancer ceases to be a stigma as it is today. The Amazons have become the heroines of modern times. We would like to look at people who experience life with HIV in a similar humanistic and, to a certain extent, a heroic perspective of everyday life.

The artists presented at the exhibition: Piotr Nathan, Bartek Arobal Kociemba and Szymon Adamczak, while discussing their personal experiences, allow us to see the change in the reality of HIV over the past few decades: from the AIDS epidemic and the death harvest of the 1980s and 1990s, through the trauma of functioning within the framework of an oppressive health care, social stigmatisation and self-stigmatisation, all the way up to a moment when properly treated HIV infection becomes only a symptom-free chronic disease and a source of artistic practice. All three artists live permanently outside Poland, which appears to be a necessary condition for speaking openly about HIV in the Polish art world.

A German artist of Polish origin, Piotr Nathan, together with the students of the Fine Arts High School in Poznań, creates a photographic–painting mural. On one hand, the photographs of Berlin tombstones commemorate his friends; people who died as a result of an epidemic. On the other hand, a photo from the Berlin subway makes references to a more optimistic contemporary perspective. Bartek Arobal Kociemba, one of the best Polish drawing artists, prepared, especially for the exhibition, a work in which he examined the several -years-long visible traces of virus presence recorded in his body – traces of self-stigmatisation, traumatic experiences and discrimination perpetrated by the health service. Szymon Adamczak, a theatre artist from Poznań, in the Sugar for the Pill video takes for the first time the antiretroviral drug. He shall do it repeatedly, every day at the same time, probably until the end of his life. The film’s setting is based on elements of the stage-design prepared by Paweł Szubert for An Ongoing Song performance – an autobiographical work executed by Adamczak as part of the DAS Theatre programme in Amsterdam. The artist is also preparing a publication, in which, together with invited authors, he explores the social, cultural and artistic heritage related to the subject of HIV / AIDS in Poland. Let us not forget about the ground-breaking exhibition in the Polish context – I and AIDS from 1996. Its documentation closes that part of the exhibition.

We also present materials about a heroic activity of Polish groups of activists, above all Społeczny Komitet ds. AIDS (The Social AIDS Committee), Zjednoczenie Pozytywni w Tęczy (Positive in Rainbow Union) and Stowarzyszenie Sieć Plus (The Plus Network Association), and social campaigns: HIVokryzja (HIVocrisy) and Niewykrywalni (Undetectable). A wide selection of educational content will correspond with current HIV prevention strategies based on three pillars: condom, U=U: Undetectable = Untransmittable (the undetectable viral load means that it is non-infectious to other people) and pre-exposure prophylaxis (PrEP). Since the life expectancy of people living with HIV and undergoing the antiretroviral therapy is the same or longer than the general population’s (due to regular medical examinations); and since it has been proven (PARTNER 2, 2018) that with undetectable viral load there is no possibility of infecting others during sexual intercourse, the major problem rests, apart from the overall accessibility of the research and the availability of free treatment, in the emancipation of people living with HIV and preventing their stigmatisation.

The part devoted to the Amazons concentrates on the materials from the archives of three associations: Stowarzyszenie „Amazonki” Warszawa Centrum (the Association “Amazons” Warsaw Central), Poznańskie Towarzystwo „Amazonki” (The Poznań Society “Amazons”), and Klub Kobiet z Problemem Onkologicznym w Łomży (The Club of Women with Oncological Challenges in Łomża). We present the clubs’ rich, more than a quarter-century old, activity. We show their political, social and community-forming strategies. We put on display archival photos, notes, publications, newsletters and personal artefacts. Amazons are the largest patient movement in Poland with about 25,000 female members. While appreciating the phenomenon of the Amazons, at the same time, we would like to feature their effectiveness and noticeability, which should set an example for other organisations still struggling for recognition and visibility, for example, those dealing with HPV, HIV, AIDS, prostate cancer and stoma.

The research part of the exhibition has been expanded to include personal statements of artists for whom illness is a practice. Dobrawa Borkała through breath, sound and smell shall convey the feelings of anxiety and alienation experienced by a body in contact with the authority of medicine and technology. In medical studies, illness is a problem that needs to be eliminated. For the artist, this division is not obvious. She believes in the holistic approach to the body and the signals it sends. Jaśmina Wójcik in her video entitled Mastectomy tells the stories of women after breast removal surgery. The narrators are shown without faces, they speak through their scars. They do not cover them with any prosthesis. They do not flirt. They are not there to provide viewers with visual pleasures. In the accompanying sketchbook entitled The Book of Death, the artist presents a specific period when her loved one underwent a period of illness. The video presents the treatment, hospital procedures, all the way to the death and ways of (not)dealing with accepting it. The author emphasises the social aspect of the disease in spite of medical individualisation. Vala T. Foltyn in her altar reminds us of the emotional support we give and need as social beings. Without it, it is impossible to build bonds, relations. Here, the experience of the disease becomes an opportunity to deepen the relationship.

The second part of the exhibition provides space for reflection. You will be able to rest and allow your eyes to wander freely across an organic ornament by Olga Lewicka covering the walls of the central gallery room. In the same space, an archive of documents, letters, leaflets and printed materials from women’s* bookshops and publishing collectives from western Germany collected by Inga Zimprich (Feminist Health Care Research Group) will be made available, as well as quotations from publications on the impact of body and disease on the writing process. A disease library was created, for individual dosing. It collects publications on patient activism, individual and institutional approach to the disease, pathographies and scientific studies. The materials provided by Ogólnopolską Organizację Kwiat Kobiecości (Nationwide Organisation the Flower of Femininity), Stowarzyszenie Mężczyzn z Chorobami Prostaty „Gladiator” (Association for Men with Prostate Diseases “Gladiator”) and Polskie Towarzystwo Stomijne Pol-ilko (Polish Society for Stoma Patients Pol-ilko) create a visual context for the works of artists. The last and the smallest room in the gallery is occupied by 3D projection and animation by Barbara Kleinhamplová under the joint title Sometimes They Almost Feel Happy. The video is a documentation of the laughter yoga session for corporate employees. It is a bitter commentary on the professionalised contemporary times in which the place for (un)controlled emotions is determined by the strict and safe framework of hourly therapy.

Creative Sick States: AIDS, CANCER, HIV is an art exhibition, though it also postulates access to knowledge. For that reason, apart from presenting art, we show visual, educational materials about HIV and AIDS, breast and prostate cancer, stoma and HPV. These materials deepen the therapeutic nature of the exposition, which is accompanied by meetings and workshops. Arsenal becomes a meeting point for art, education and care. In an interdisciplinary way, it breaks the boundaries among various areas of care about people and the environment, proving thus that a disease is not a private matter but a political one. 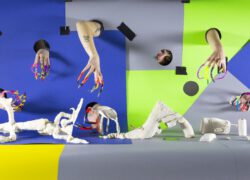