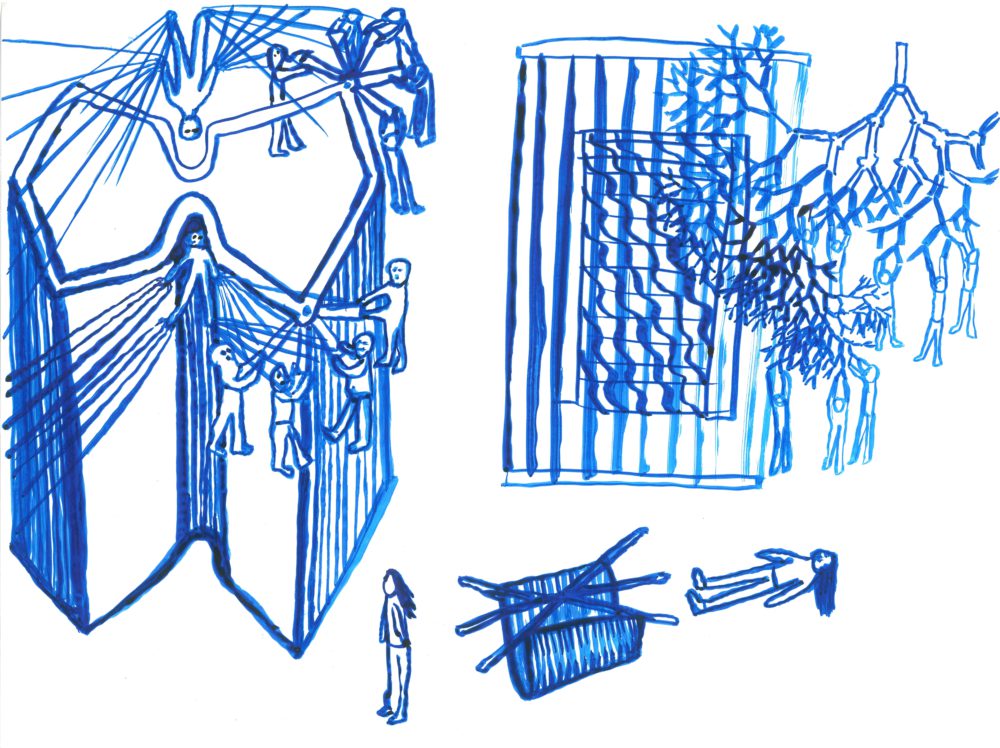 It seems that most of us are constantly talking about the relationships we care so much about. Do we really care about them so much? A dozen or so years ago, interaction was a voguish concept integrating the world of art and science; it was then replaced by participation. Today, we talk more often about viewers’ co-production and co-creation of artistic situations. However, no matter what term we use, each of them puts the viewer, i.e. the human being, in the centre.

For Magdalena Starska, whose creative endeavours – out of necessity of definition – can be called relational or performative art, interpersonal relations are of course the key. However, the relations with the so-called inanimate matter, i.e. the position and behaviour of humans towards objects surrounding them, are equally important for her. By her own admission, she does not separate the spirituality of matter from human spirituality, treating them as equal. What could this mean, then? Objects are important to her, she treats them as her companions that allow her to survive difficult moments. On the one hand – she cares, as she says, for the development of spirituality, on the other hand – she cares for her well-being and the most mundane things. This applies both to private life and the field of art, which are obviously interwoven. Experiments with the use of objects, their surprising combinations, attempts to give them new applications and placing them in unobvious contexts are the signature of Starska’s creative activities.

Significantly, objects are not fetishized by the artist, or put on a pedestal, they just serve some purpose and trigger a reaction in her audience. They are useful, even if their purpose was to support, prop up, point, etc., the next elements of the exhibition, or build the environment in which the workshops take place. Magdalena Starska’s exhibitions so far have gathered all kinds of sponges, kitchen towels, apple peels, rakes, pieces of felt, foil, plaster casts, and old coats… The list is much longer, in fact, and includes dishes, clothes, food, and simple everyday items. These are second hand, received as gifts, or sometimes found in the vicinity of a given gallery. The usefulness of the participation of these objects, often from the home, i.e. familiar context, was manifested in evoking a specific memory, feeling and mood in the recipient.

Using objects in the process of creating, the artist always gives them each time due respect and also the right to freedom, so that they become for her an active and supporting company. This is often seen when we create complex installations in art. The networks of objects and matter surround the recipients and create the world according to the artist’s logic. The latter, recognizing a kind company in the matter, shares such a safe vision of the world in his or her art. This is the case with the new project called Athletic Weaving, where the presence of objects will be as important as that of people, who set them in motion and impart them significance.

The leitmotif of the activities planned in Arsenał Municipal Gallery of is plaiting and weaving, and the goal is to draw attention to how you can care for both people and objects. The basic material is this time string, which will help the artist, as well as anyone willing to accompany her, to weave and jointly build the installation. In her projects, the artist has often created similar situations of an exchange, which she believes – may occur on the level of human rationality as well as on the level of non-human feeling, as part of a larger whole. Participants of Athletic Weaving will on the one hand support the artist in building the show, and on the other hand will receive tools, materials and technical support for the hand-made items they will take home. The expected exchange of goods and skills between the participants can be supplemented with the exchange of experiences and stories that people will have the opportunity to share during the joint weaving exercises.

Magdalena Starska seems to be an example of an artist who intuitively senses that in order to engage others in action, from the very beginning we have to give them the chance to give form to their ideas. The artist’s main task in this situation is to prepare the ground for collective action and to show participants the starting point and the possible destination. The project will include workshops, meetings and a performance. It includes a space for action only slightly arranged at the start and a place to invite others to conceptual work and all kinds of creative exchanges. The exhibition is of a processual and performative character, which means that for almost a month it will transform, expand and evolve.

A certain inference process is started in the viewers entering the exhibition space, each time anew. Most of the viewers come with their own expectations, associations and concepts about how they should behave in an art gallery. The artist attempts to break up the initial intuition with which the viewers come, drawing them into their narrative and inviting them to add something to each other in the process of creation. In the case of Athletic Weaving, viewers get an impulse and tools to broaden and solidify both their experience and the new knowledge they have gained. In summary, it is therefore more about initiating certain processes, looking for a form together with everyone involved in the project rather than advancing a specific agenda.

In the case of relational art, the exhibition can be regarded as valuable only when it manages to build a community, albeit a temporary one. It is also possible that objects manufactured and settled in space, entering everyday life, will facilitate a longer relationship and consequently a more real community. The exhibition and the attendant educational program, without which it is difficult to imagine the functioning of a public gallery, is above all an encounter. It is also an opportunity to exchange a certain amount of experience and skills supplement between all the parties involved in the project implementation and a short-lived consent to be aware of others in real time. This being together is far from obvious today, when people often feel more comfortable sending a text message than talking to the person staying in the same room. One of the strategies used by Magdalena Starska to build temporary communities seems to be drawing as if by a magnet the activities that are already inherent in people. As the artist admits, I have noticed that people engage automatically not only in the activities they know, but also in those that simply bring pleasure, joy, relaxation, and relief. Usually, the audience eagerly joins in simple, everyday activities, somehow archetypal as singing, drawing, cooking, or weaving, the essence of the Poznań project. Sometimes, by repeating these actions, which usually take place in small groups, it is possible to achieve a state of concentration close to contemplation. The artefacts produced during the handicraft workshops will be partially incorporated into the exhibition space of Athletic Weaving. So will the pictures of braided items installed in the homes of the workshop participants and the documentation of the action, which the artist wants to initiate during the exhibition. Appearing here in addition to the string as the principal material, the objects will be used for experimenting and for sharing in the spinning of the participants’ story.

Certainly, Magdalena Starska does not want to show people things that are great, speculative or unusual from the position of authority. Rather, she wants to impart to the participants that, when goaded to action, they can do things that are important, though not necessarily spectacular, with her. Starska invited a few artists and handicraftsmen, her friends, to cooperate with Athletic Weaving. Together with them, she wants to try to involve local residents and passers-by in joint action. During the performance, the artist will treat strangers passing through the Old Market with kindness and invite them to take part in a short adventure of carrying one other. During the workshop she will want to encourage the participants to treat with kindness the objects from their own private everyday life. “It will be a micro- and macro-view of our human treatment of our homes, resembling that of the city space.”  In the projects of Magdalena Starska, it seems relevant to mingle the content of the exhibition with the real / external world. Athletic Weaving is, therefore, an example of an exhibition that is a pretext to work, to organize activities that are pleasing and at the same time activities outside the exhibition, and even outside the gallery. Entering the space of the Old Market Square with her performance or making her weaving in the street connecting Arsenał Municipal Gallery with the neighbouring Military Museum, the artist reminds us that the art gallery always remains a part of some ecosystem.

Starska wants to draw attention to the problem of the disappearance of direct contacts between people in the urban space. This is a form of experiment, the outcome of which we can only tentatively assume.  According to Magdalena Starska, “We miss ordinary human kindness in Poznań. Possibly, the way we treat people who pass us on the street reminds us of the way we treat objects in our own home spaces.”

I believe that what will be initiated and “launched” in the participants of Athletic Weaving will be continued by them. Sometimes such one-off situations can affect the imagination and the more absurd they are, the longer they stay with us. New skills require strengthening. As Magdalena Starska says, It is important to foster the right conditions for creating relationships. I believe that first you should see man as a matter, which is just as important as any other. There will then be no separation of man from what surrounds him. It is possible that it will be easier to start with non-human matter and see beauty in it. Next, this admiration must be transferred to the human being – the matter next to oneself – who will thus blend in with the general matter.

Let us weave on, then. In the face of contemporary social problems, building communities seems to be an absolute necessity. 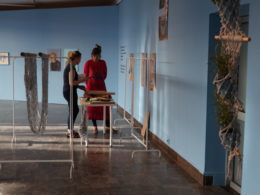 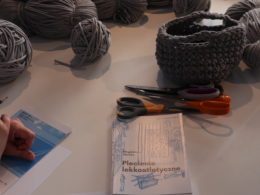 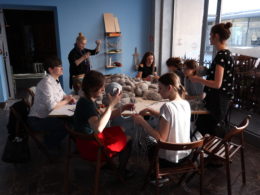 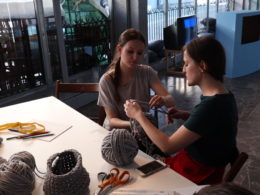 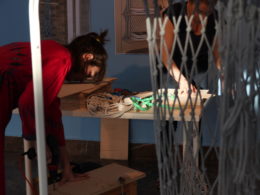 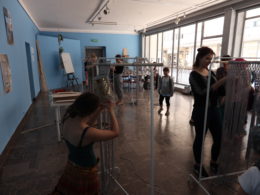 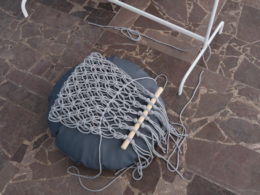 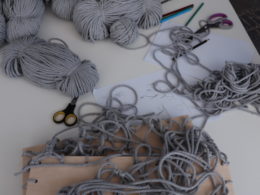 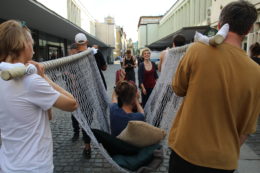 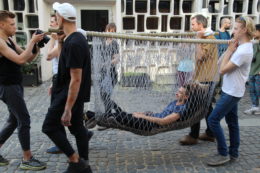 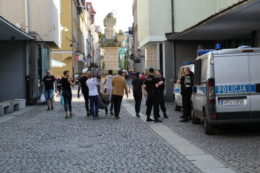 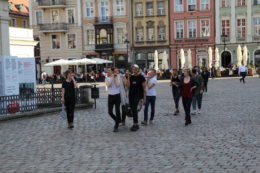 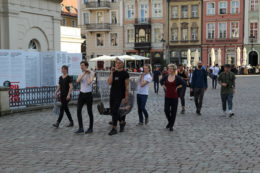 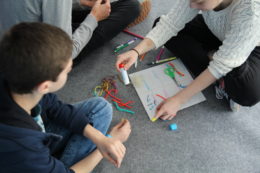 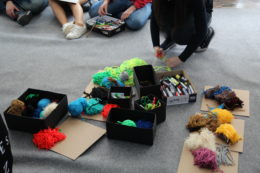 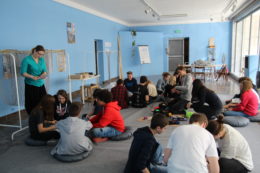