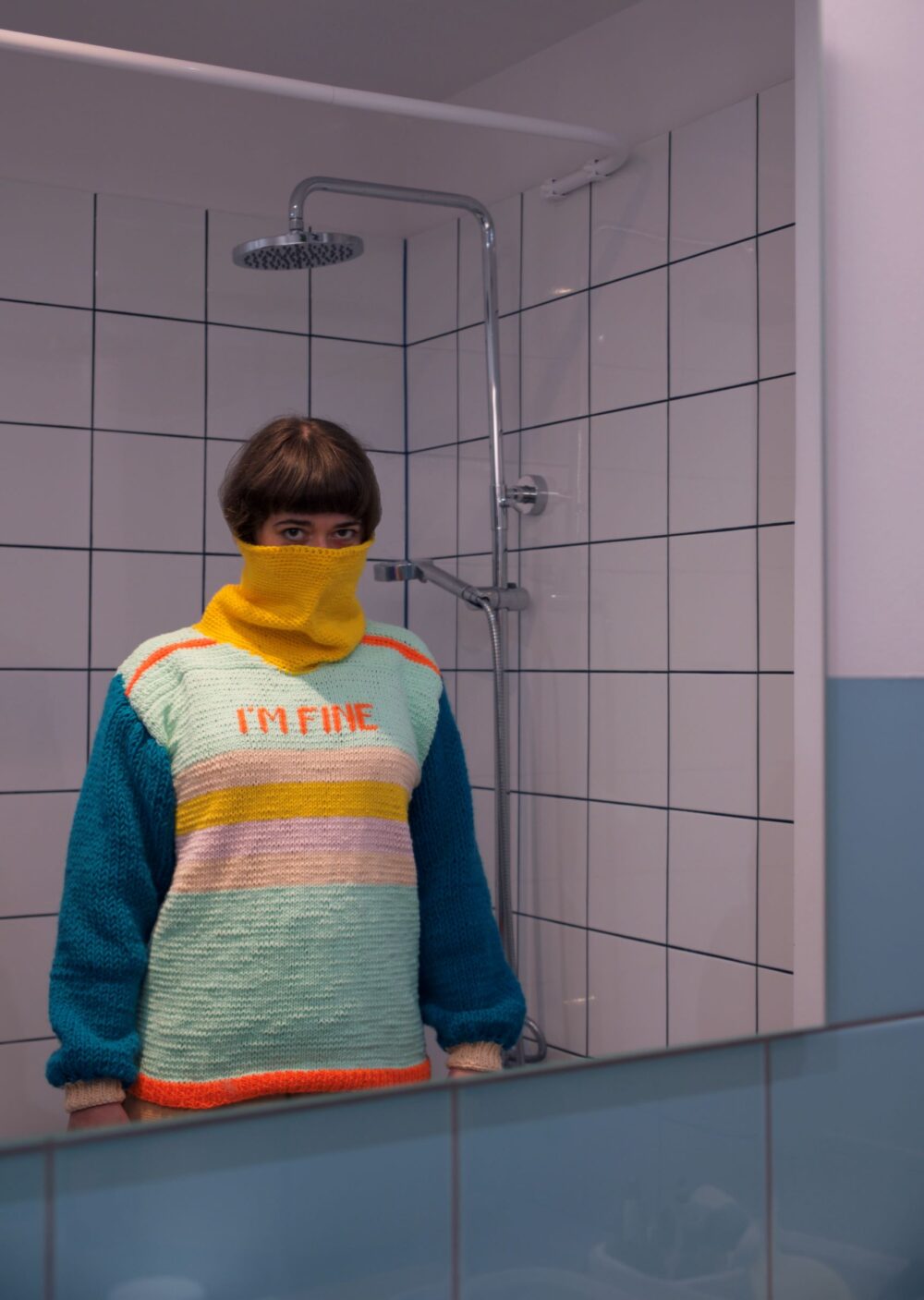 The photograph shows a family, from the left: Karolina, her two years older brother Filip, grandfather, father Sławomir, and mother Aleksandra. They are sitting around a white tablecloth-covered table eating a meal. In the background, on the wall, there’s a monidło, i.e., a coloured wedding photograph, depicting the grandparents at, probably, the best time of their lives. Everything appears to be exemplary, festive, even – no Polish politician would hesitate to show off such a family on their election posters. This photograph opens the Happy Family Project website, set up by the artist Karolina Balcer for research purposes. The focus of her investigation are her loved ones, and the starting point – a desire to comprehend what her family has endured over the last several years – ever since Filip sought help for addiction, received a double diagnosis (substance use disorder + schizophrenia) and periodically battled homelessness; ever since her parents became experts in the field of co-addiction, and she herself experienced depressive episodes.

This typical Polish family is fighting addiction, co-dependency, homelessness, depression, schizophrenia, and bipolar disorder – and none of this is visible in the photograph. What often escapes the frame is indeed the subject of Balcer’s work. The artist reveals family secrets that are often swept under the carpet. In order to do that, she employs knitting and tufting, turning family traumas into shapes: pillows with destigmatizing slogans, sweaters with practical answers to the most frequently asked questions, doormats displaying a cry for help, a carpet showing severed family ties, happy pills for everyday day, or a portrait of her father covered with a protective duvet-armour.

Balcer emphasizes that illness is a communal experience – it plays out within the closest, familial relationships, from which it is impossible to check out:

“A coaddict adapts his/her behaviour to a destructive situation in order to maintain the family unit. This causes a number of physical, emotional and psychological changes that result in a state resembling addiction.” [1] As they attempt to help themselves, family members attempt various tools related to education – more or less formal support groups, therapy, studies, reading specialist literature or, as with Karolina, initiating a research and artistic project that allows them to distance themselves from their own experience. Translating these experiences into symbolic language facilitates communication.

Aleksandra Kubiak, an artist and performer associated with the Sędzia Główny artistic duo, undertook a similar process of working through her own traumatic family history using the language of art. In the 40-minute film entitled Śliczna jesteś laleczko/You’re a Cute One, Sweetie (2017), she explores her relationship with her mother, who died in tragic circumstances.[2] For Kubiak, art becomes a therapeutic tool. On the one hand, it may allow viewers to understand the artist’s past and experience catharsis with her, and on the other – may cause embarrassment at crossing the boundaries of her intimacy.

Balcer uses humour to safeguard herself and the audience from getting too close. This allows for a greater comfort and makes it possible for a  viewer to experience her work on multiple levels: aesthetic, research, emotional, and relational one. The artist doesn’t impose her narrative. Even though she communicates it in a direct, taboo-free way, she leaves a lot of space for interpretation and for complementing the rugged visual signs with content, not necessarily directly related to her biography.This empathy towards the viewer distinguishes Balcer’s work from that of other artists dealing with trauma, also because she pays attention to the educational, pragmatic and didactic dimensions of her activity. Hence, here in Poznań, during the second – following a show at Miejsce Projektów Zachęty – run of her exhibition, leaflets, and information about support groups operating in the region will be distributed. In addition, the show will be accompanied by guided tours and an educational programme. There will also be an event presenting a guide edited together with experts, containing information on mental crises, addiction, codependency, homelessness, depression, and ways of dealing with such issues.

Elvin Flamingo’s letter, published two years ago [in 2020] in the “Postmedium” magazine, also helped break the taboo related to mental illness enhanced by working in the art world. A well-known, award-winning artist of the middle generation confesses to his life with bipolar disorder, periods of mania and depression. They brought Flamingo success, but also endangered his life – the artist survived several attempts to take his own life. Importantly, his statement emphasizes the role played by the art world, which drives and rewards narcissistic and manic disorders.

The themes of neurodiversity, family, and identity crises have become increasingly popular with the younger generation of artists. For painters such as Patryk Różycki or Martyna Baranowicz, the concepts of masculinity and femininity, associated fantasies and inevitable failures are the material with which they build the visual language of their statements. Through painting, they seek their own place in the hostile environment that is one of the most conservative countries in Europe.

Adelina Cimochowicz’s project entitled Museum of Neurosis (2017), awarded at the Młode Wilki [Young Wolves] Art Festival, collects photographs documenting people’s struggles with their obsessions and compulsions. The virtual museum archive includes, for example, taps and stove knobs, door handles, locks, balcony doors, windows, gas stoves… The photographs bear witness to the repetitive actions taken by people with obsessive-compulsive disorder in order to maintain a sense of security and alleviate guilt stemming from the fear of triggering dramatic consequences if the gas is not turned off or the balcony door is not closed. By attaching artistic value to their neuroses, the artist validates that, which causes shame while maintaining anthropological distance.

Challenging taboos associated with the subject of psychological conditions means that they can be discussed more often and gradually normalized, meaning that, eventually, there’d be less stigma attached to those living with them. However, reflecting on one’s own well-being is too rarely combined with consideration that would allow us to examine the ways in which society works, that, in turn, can provoke and fuel fear and anxiety. I do hope that Karolina Balcer’s exhibition, Happy Family, a family counselling centre, can contribute to the broader trend of destigmatizing psychological states and illnesses by emphasizing their critical and community-forming potential. The exhibition aims to produce and disseminate knowledge, as well as to encourage viewers to destabilize the existing, oppressive societal patterns. Its goal is to co-create a space in which living with trauma, co-addiction and illness doesn’t lead to marginalization, but adds an indispensable element of realism to the collective experience, also related to our functioning within the art world.

[2] The film was shown, among others, at the exhibition Życie codzienne w Polsce/Everyday Life in Poland at the Municipal Gallery Arsenal in 2018, curated by Marek Wasilewski.