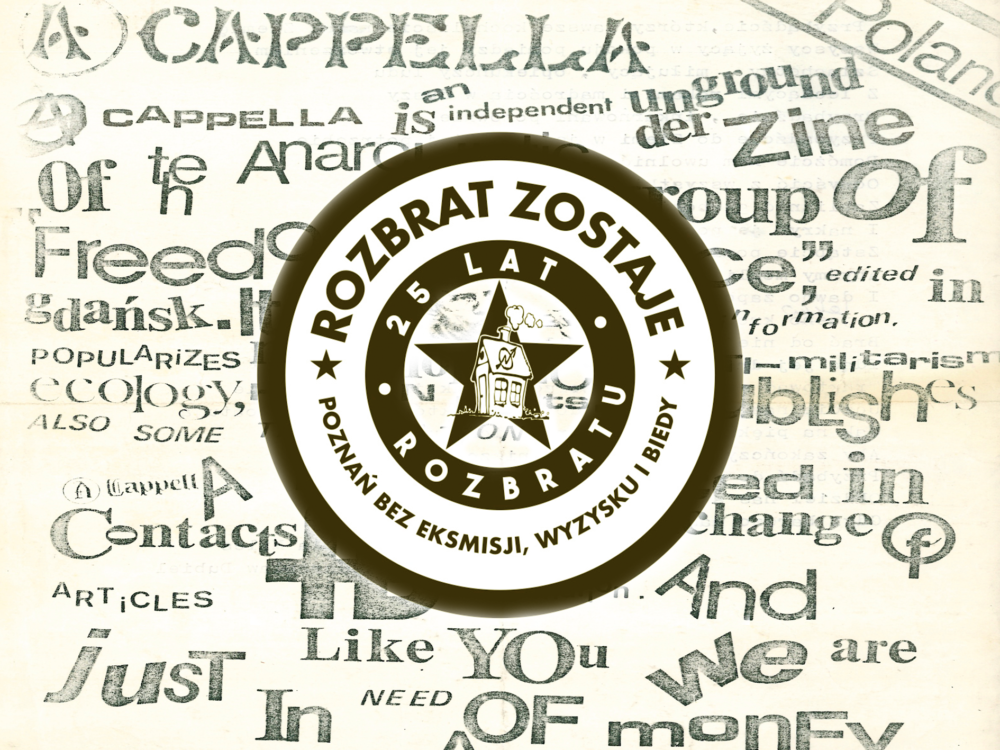 The exhibition “Poznań with no evictions, exploitation, and poverty! 25 years of Rozbrat!” is an attempt to present the multi-layered, socially, ecologically, and culturally engaged activity of the Rozbrat collective. In order to bring visitors closer to the most relevant local issues, we have divided the exhibition into eight thematic sections: tenants’ movement, workers' movement, culture without censorship, printing matter, social feminism, environmental issues, anti-war activities, social campaigns and initiatives. Each issue is presented on a separate infographic. Additionally, zines, newspapers and brochures published by the Rozbrat collective are available on spot. The subject of the tenants’ movement is supplemented by the documentary film made during the protests against the displacement of the residents of the house at Stolarska Street and for the liquidation of a container housing estate in Poznań. In turn, workers' matters are taken up by a film titled “Płyta/Plate", documenting protests of Cegielski's employees and a video referring to the collective labor dispute at Amazon.

The exhibition aims to draw attention to the issues of privatizing public space, appropriating green areas by developers, and limiting access to common areas. Rozbrat, as an important culture-creating place existing on the map of Poznań for a quarter of a century, should not disappear from it due to economic pressure and private interests.

The Rozbrat’s history begins in October 1994 on what today is 21 Pułaskiego Street in Poznań. This was when a few people spent the first night in ruined accommodation abandoned by Darex company. Today, after 25 years, it is one of the oldest socio-political centres in an appropriated space in Europe.

Taking over vacant buildings is a common practice, understandable in the times of anti-social and predominantly profit-oriented housing policy. The Rozbrat collective, unlike other squats, was active in broader cultural and social fields from the very beginning. In this case, the settlement was a political act, reformulating the existing social order based upon the pressures of free market economy. The foundation of this place was a sign of support for the bottom-up initiatives and movements opposing state oppression and business dictates.

When the first mass evictions started to occur at the end of the 1990s, Rozbrat, together with the Anarchist Federation, formed the foundations for the tenants’ movement. The agreement “Poznań, city for people” allowed for the first eviction blockades in the city. Drawing on the experiences from that period, and in order to facilitate the effectiveness of these actions, the Greater Poland Tenants' Association was created at the turn of 2011 and 2012 by the Anarchist Federation together with the tenants of the “cleaned” tenement house at 3 Piaskowa Street that was taken over by a bank. Thanks to self-organization and protests it was feasible to stop dozens of evictions, dismantle the container housing estate, write off the social housing tenants’ debts, start an extensive programme of accommodation development, and change the rules for granting social housing. Setting up a coalition and involving artists, scientists, and residents of Poznań in these activities made it possible to effectively oppose the tenement houses’ “cleaners”. Finally, the Greater Poland Tenants' Association was the first in Poznań to cooperate with the city’s least privileged residents – the Roma people living in the cardboard camp.

The workers’ movement was also formed within the space of the Collective – the first meetings of the anarcho-syndicalist Workers’ Initiative (Inicjatywa Pracownicza) took place at Rozbrat in 2001. Their goal was to support protesting workers and protect fired unionists. Three years later the Anarchist Federation from Poznań and the Cegielski factory workers established a “regular” trade union under the same name. Today the union consists of over 3000 members centred around approximately 70 committees active in industry, education, logistics, culture, social care. In the Poznań agglomeration there are the IP’s organizations working at the Cegielski factory, Amazon, Volkswagen, nurseries, theatres, hospitals. One of the IP’s committees functions also at Rozbrat; Poznań Inter-Union Committee supports many professional groups, e.g. outsourced women porters.

Ecology is another important part of Rozbrat’s activity. The activists have been actively involved in the debates and campaigns concerning climate change and the negative impact of human activity on the environment since the 1990s. They took part in protecting e.g. Saint Anne Mountain in the 1990s, Rospuda Valley, and Białowieża Forest. Rozbrat itself is located on a territory constituting an integral part of the city’s western green wedge. This is where demonstrations for the protection of green areas often started.

Rozbrat is a place where one can organize differently - without subsidies and sponsors, on non-commercial terms while building a common, socio-political center accessible to everyone, regardless of wealth and origin. But it is primarily a place where various social activities take place, which reach further into the city space.

In other words, there is no Poznań without Rozbrat!