The conversation between Paweł Leszkowicz and Daniel Rycharski will be devoted to the role of art versus the situation of LGBT persons in today’s Poland. Internationally, we have observed in the past decade a marked increase in the area of civil rights and cultural expression of non-heterosexuals, with concomitant reprisals and new exclusions. New countries have legally allowed civil partnerships, different religions open up, numerous exhibitions of queer art have been held; the time of marginalising and invisibility recede are slowly becoming a thing of the past. However, in Eastern Europe, under the impact of Russia and religious fundamentalism, we have noted increasing homophobia, censorship limits the freedom of speech, receding into privacy has become a coping strategy as during the totalitarian times. The role of culture and LGBT rights are strongly correlated with the local context, and in the international perspective is suspended between new emancipation and old oppression, depending on the place where one lives and makes art. We will reflect on what this artistic, political and personal situation looks like in Poland and what are the artistic, exhibition and social strategies. Can art or visual activism play any role with respect to the stalemate reached by civil and love rights of the minority in Poland?

The Dialogising of Art Historians and Artists series is a series of meetings carried out by faculty members of the Art History Institute of Adam Mickiewicz University and the artists they invite. The subjects of the individual meetings, reflecting the program of current shows at the Arsenał Municipal Gallery, will be a starting point for a discussion on art, exhibition policy or criticism. Important here will be the confrontation of two perspectives of looking at, understanding and speaking about art or art historians and artists. This time the debate will be held by: Dr Paweł Leszkowicz (art historian, Adam Mickiewicz University in Poznań, Institute of Art History) and Daniel Rycharski (artist, LGBTQ activist).

Daniel Rycharski – a visual artist, activist. Born in 1986 in Sierpc. Lives and works in Sierpc and Szczecin. Active in art projects in rural areas, author of rural street art, of films, installations and site-specific objects. A culture animator. Author of public projects in rural areas involving the local community. Between 2005 and 2009 in an art duo with Sławomir Shuty. In 2009 he decided to come back to his native village of Kurówko. In his art practice Rycharski is inspired e.g. by sacred elements and folk beliefs. In 2012 awarded with the Kulturysta Roku Award granted by Channel Three of Polish Radio. In 2017 recipient of Paszport Polityki in the Visual Arts category. He has participated e.g. in the exhibitions: Making Use. Life in the Post-Art Era, Museum of Modern Art, Warsaw, 2016; Into the Country, Salt Ulus, Ankara, 2014; What You Can See. Polish Art Now, Museum of Modern Art, Warsaw, 2014; Street Art In the Countryside, Wozownia Art Gallery, Toruń, 2012. Late Polishness, Ujazdowski Castle Centre for Contemporary Art, Warsaw. 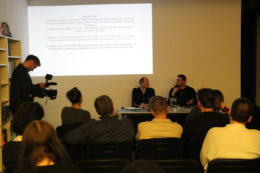 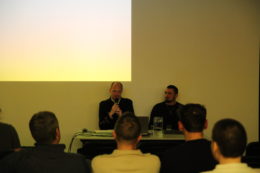 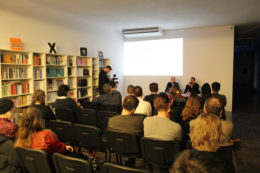 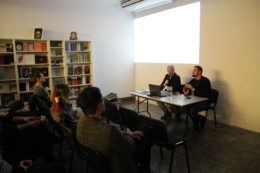