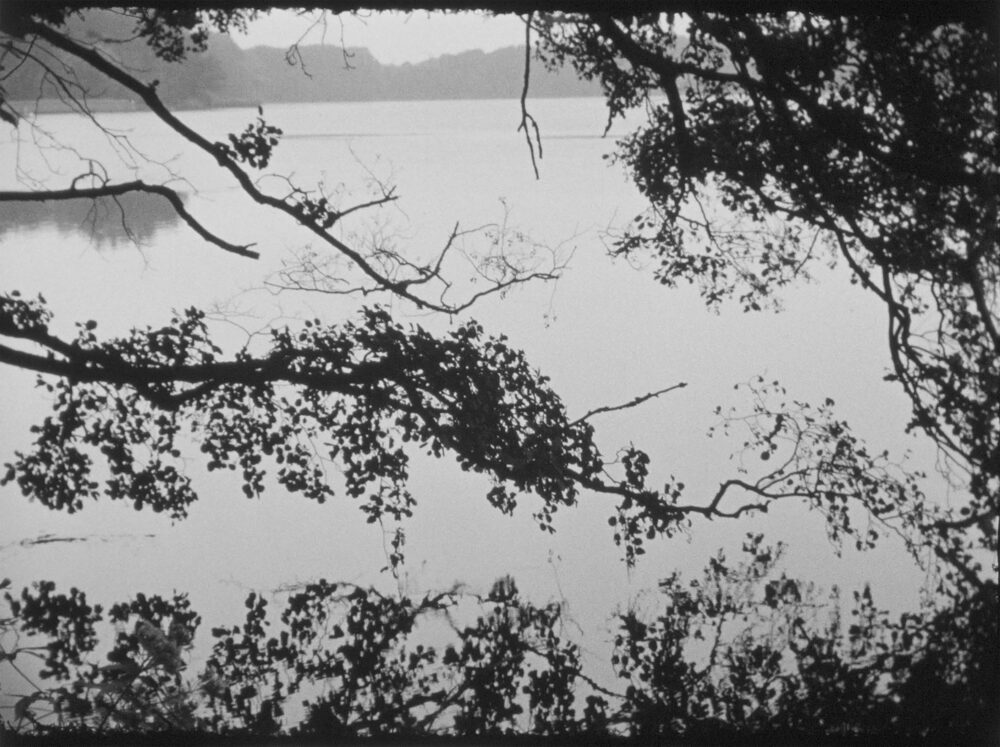 Adriana Molenda and Anton Varga, whose exhibition is the result of their contribution to the open call announced by the Arsenał Municipal Gallery, decided to create an installation whose main element is a video portraying a special place in Poznań, the idyllic Lake Rusałka. Or rather, the lake might be idyllic today, but not at the time of its creation. Prisoners from the German labour camps in Poznań, mainly Jews, were forced by the Germans to work on the creation of this artificial reservoir during the Second World War (in the years 1941-42, to be exact). The matzevot from the closed synagogue and from the Jewish cemetery on Głogowska Street were used to solidify the bottom. In the vicinity of what later became Lake Rusalka in January 1940, the SS carried out mass executions of prisoners from the Poznań extermination camp Fort VII.To film what is a recreational area today, the artists used a camera model manufactured in the latter half of the 1930s and used in the 1940s. The film was made in the summer of 2022. In the project description, the authors’ stated their intentions as follows:

“Hegel wrote that Minerva’s owl flies out at dusk, meaning that we can only understand the real meaning of events when they have passed. Following Hegel, Slavoj Žižek states that we cannot change the future if the starting point for it is the same present. According to him, the present can only be changed by transforming the past. This sounds almost like a challenge for alchemists. And that is our ambitious attempt here.”

Indeed, it is an ambitious attempt and one that evokes the age-old dream of humans to travel in time. Visitors to the exhibition will thus be invited into a kind of metaphorical vehicle. However, it will not be the great fun known from the cinema, but a confrontation with a painful truth. It could have been different if… And it could be different now, but… The artists talk about history, but also pose questions about its re-interpretation, in a way to break both the impasse of complacency stemming from the conviction that we have already learnt the right lessons from past events, and the helplessness we yield to when the naivety of our earlier approach is exposed.

Black-and-white shots of the beautiful surroundings of Lake Rusalka, views of sky and water, black lines of emerging branches, people bathing and… silence. This silence is one of the major elements of this installation. This silence makes the real unreal and turns the seemingly joyful into something painful. The beauty of nature in black and white, when the context is known, seems downright sinister. There is a deliberate play with time; the artists’ metaphorical gesture becomes clearer and more and more painful.

In the project description, the artists ask the following questions: “Who are we as heirs to this place? Who do we become when we, as the protagonists of the video recording, are placed in the visual context inherent in characters from the distant past? What will be the meaning attributed to the events we experience today by those who will physically take our place 80 years from now?”.

In a very interesting text on the relationship between changes in nature and the Holocaust (treated, by the way, as one of cataclysms), Jacek Małczyński wrote:

“The numerous studies on the Holocaust stem from the conviction that understanding the mechanisms that led to it will allow us to avoid similar events in the future. In this sense, as Alan Milchman and Alan Rosenberg write, it is a transformational event: ‘by following it, we can proceed to eliminate the spectre of the genocidal universe’.” (A. Milchman, A. Rosenberg, Eksperymenty w myśleniu o Holocauście. Auschwitz, nowoczesność i filozofia, transl. L. Krowicki, J. Szacki, Scholar, Warszawa 2003, p. 159)

When we discussed the message of Here and Then at Dusk, Adriana Molenda, pointed to this regrettably illusory aspect of treating mass crimes as a warning, preventing the repetition of the atrocities in the future. Unfortunately, this is not the case. There is now a resurgence of fascism in a world where former death camp inmates and witnesses to mass atrocities are still alive. History seems to be coming full circle rather than moving on towards peaceful development, deeper awareness, respect for human and non-human beings… Is the famous Latin maxim Historia magistra vitae est (History is the teacher of life) merely a utopian assumption, a fantasy? Or perhaps, as the artists suggest, in order for the living to truly learn from history, they need to rewrite it, moving beyond the recognised interpretations and finding other cause-and-effect relationships, learning the hidden meaning of what really happened in the past and why. Perhaps only by persevering in this effort will we have a chance to change and build a future that will offer us different lessons.

I am indebted to Mateusz Nowacki for pointing out J. Małczyński’s text.