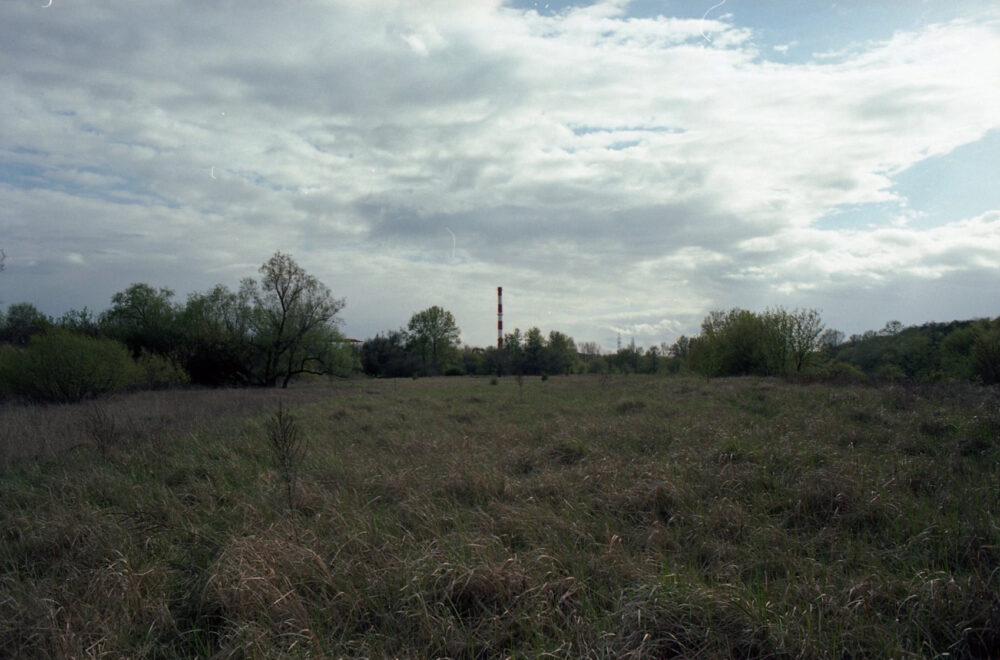 An island, the only island in the area. Seemingly remote — after all it is an island. Beyond the railway tracks and bushes there is a little peace, a bit of magic. Once we go through the tunnel underneath the trees, we can see a family of swans sitting quietly in the water, observing our movements and a heron — just about to take off — on the other side. We walk along a wall behind which we can hear intriguing industrial sounds. Here, I feel a bit like in a fairy tale, I feel calm. I am addicted to the city — I am close to the centre, I feel peaceful, there are no people — nature gives us this peace. There are a lot of bushes and trees around; it is a kind of urban oasis. There used to be a city beach here.

Looking at the opposite bank from behind this tree tunnel, we see a simple, large building of a former heat and power plant, once — of course — a state-owned plant. Its last owner was the French energy company, Veolia. The building has recently been sold to a developer who has an idea to “plant” a high end, and rather inaccessible, housing estate on part of the island. The opposite bank and the nearby meadow will never be the same. Right now, the only visitors are anglers, people in homelessness crisis, and those who want to come here because “there is nothing there.” Thanks to the fact that “there is nothing there”, there’s this kind of peace and relief.

I still cannot understand why it seems to us that we are above nature.

— It's just a tree, they're just animals.

Why do we keep thinking that we can subjugate nature?

We are afraid of the existing state of nature — not human enough, especially in the city.

— Chęchy – a tall meadow, spiky bushes, tall grasses; you have to check for ticks when you come back. When you sit down on concrete, you know that you won’t get ticks and nettles won’t sting your legs.

— Spaces in the city that haven’t yet been developed are the worst. How can that be!

— There must be something there, maybe a tree, but it must be planted by a man– if it grows by itself, we are done.

Because of the high density of vegetation in the area where the artwork is displayed, we suggest wearing trousers, long sleeved clothing and using insect repellent.