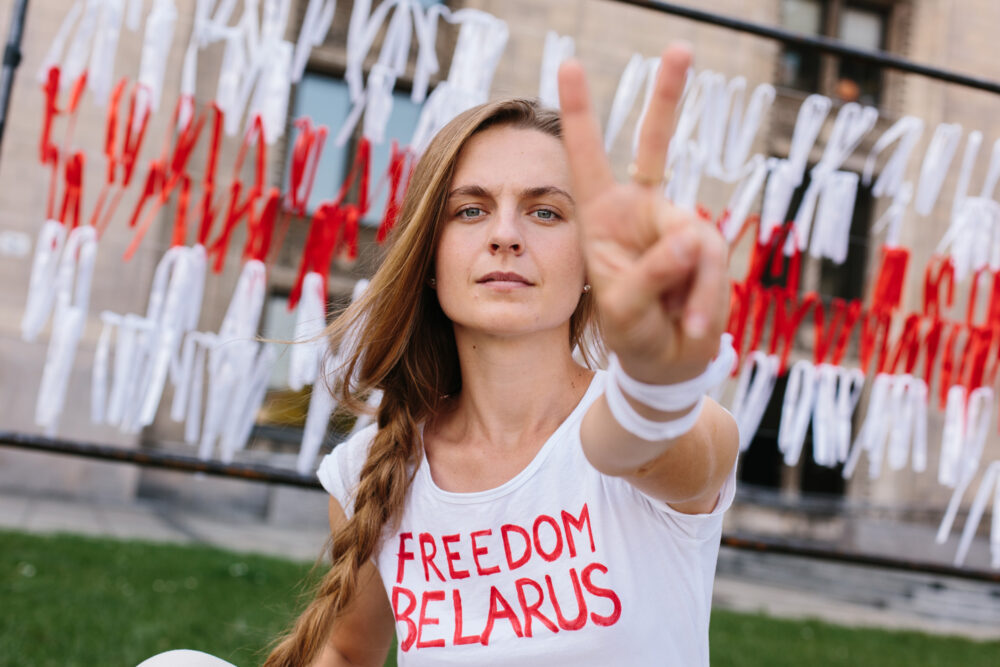 The second talk of the series, founded by Fundacja UAM - now by Paweł Leszkowicz and Jana Shostak, will concern Shostak's work in the context of contemporary feminist art in Belarus, but also art dealing with the fight for equal rights for LGBT+ minorities in Belarus. Jana Shostak is an artist and activist, well recognized for her projects regarding refugees' status ("Newman, Newwoman, Newmen" - ongoing since 2017) and for her engagement in contemporary political problems in Belarus. As a result of the re-election of Alexander Lukashenko for the president of Belarus in 2020, Shostak initiated "Global scream for Belarus" project. Due to its straightforward message and radical means, her artivism has been belittled by politicians. After her protest against the diversion of Ryanair Flight 4978 with Belarusian activist Roman Protasevich on board by air traffic control to Minsk National Airport became an object of criticism due to her transparent clothes showing her nipples, Shostak decided to use the impact of that criticism by commencing an action "Neckline for Belarus". The artist attracted attention to the part of the body subjected both to the gaze and censorship, using it to display names of companies cooperating with Belarusian dictatorship.

*Pawel Leszkowicz is a Professor in the Department of Art History, Adam Mickiewicz University, Poznan, Poland. He is an academic lecturer and a freelance curator specializing in international contemporary art, curatorial and LGBTQ studies. He is the author of the Ars Homo Erotica (2010) exhibition at Warsaw's National Museum and numerous queer exhibitions and symposia in Poland and the UK. He has written four books: "Helen Chadwick. The Iconography of Subjectivity" (2001), "Love and Democracy. Reflections on the Homosexual Question in Poland" (2005), "Art Pride. Gay Art from Poland" (2010), and "The Naked Man: The Male Nude in post-1945 Polish Art" (2012). His contributions have been published by Routledge, Palgrave Macmillan, New York University Press, Ashgate and Manchester University Press.

*Jana Shostak - an artist who turned activist in 2020. A realist who demands the impossible. She uses feminatives on a daily basis. Believes in the effectiveness of art, solidarity and the power of cooperation in culture. PhD student at the UAP (University of Fine Arts in Poznań). In 2021 Shostak was nominated for the Passports of Polityka. She is also the winner of the Spojrzenia competition.Since 2016 she has been consciously using mass media as a platform to spread her artistic activism. Everyday at 6 P.M. (until the end of the revolution and for one more day) she co-creates a temporal memorial - one minute of scream for Belarus. Shostak together with Jakub Jasiukiewicz is a co-director of the film "Miss Polonia" (produced by WFDiF). She represents the civic initiative "Partyzanka".